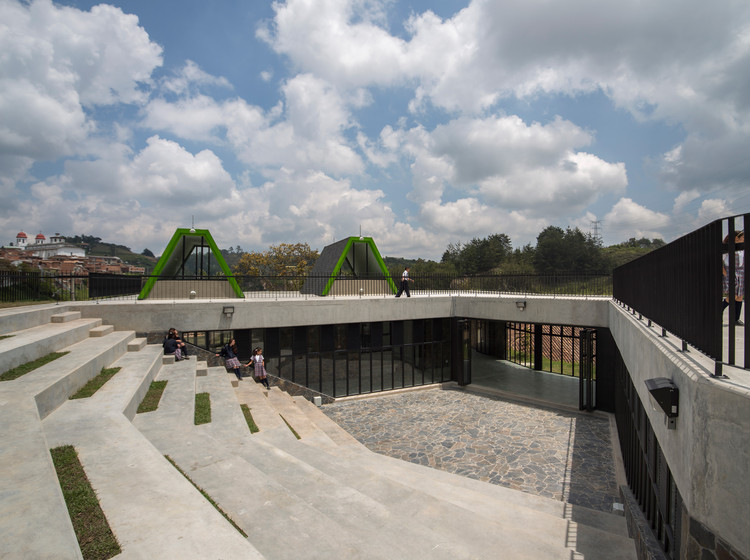 This Community Center is part of a new network of small format public buildings which have been planned by the Government of Antioquia, distributed in eighty municipalities. This new network is a wide educational project with a public character in organization with the municipal communities, its aim is to make high quality education reach various regions of the department. All the community centers have a similar program and a unique public space. This kind of project set out by the Government of Antioquia allowed to do collaborative work between a group of representatives of the municipality, of the Government and the architects: through simple meetings the community expressed their wishes and needs regarding the educational and architectural project with texts and drawings.

San Vicente Ferrer is a municipality located in Eastern Antioquia at 2150 mts above sea level, in a mountainous region with a constant cold climate. 70% of its inhabitants are farmers. Its little center consists of an “organic” urban structure laid out on an irregular and steep topography. The allocated plot for the community center is located on the edge of the town center and is a fragment of a mountain which was previously cut and flattened on three sides of its perimeter, leaving an elevated and sloping surface.  The drawings and petitions of the community were consistent on the wish of having a building with a central patio and the possibility of having an open air theatre, requests which were articulated with the topographic characteristics of the plot and the educational program defined by the government.

The pedestrian and vehicular path which connects the community center with the urban center is articulated to a new access ramp which crosses the building and its stepped patio towards the public terraces of the roof from which one can observe the close landscape and circuit back to the town. This building wants to restore the mountain fragment which the earth movements left, increasing public spaces with its roofs and stepped patio; it can be crossed from the roof to the interior, o from the access ramp towards the patio, and its geometry is obtained from the contour lines of the land. The dark stone which was chosen to veneer its walls and the concrete tiles of its floors are connected to the traditional materials used in constructions of the region. Every interior space has a skylight orientated to receive indirect light, and the cold north-south air stream is obstructed with the arms of the building allowing a temperate climate in the interior patio which serves as an open air stage.