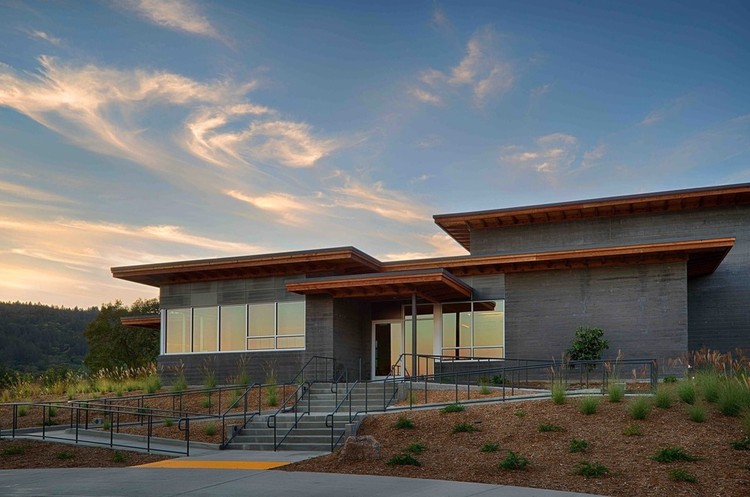 Text description provided by the architects. The Titus brothers reached out to MH Architects to explore the concept of a new winery facility located in Napa Valley in 2012. The client’s stated goal was to express the spirit of Titus Vineyards wine through the architectural components of the winery design. MH Architects responded with a series of design iterations before narrowing the focus toward a design that best matched the client’s needs. During the process, architect and client reviewed the basics of production flow, matched hospitality requirements with current trends in the wine tourism industry, and created a building aesthetic which captured brand identity. The design team worked closely to accommodate the complex layout of shiny fermentation tanks which catalyze anaerobic reactions under the same roof which hosts aesthetically-conscious guests with discerning palates.

Bordered by Silverado Trail to the east and the Napa River to the west, the 54-acre project site is located just north of St. Helena with views overlooking estate vineyards. Previously, an existing farm house accommodated occasional informal tastings on a picnic bench and wine was produced at a rented custom crush facility. The client wanted take advantage of the picturesque setting and integrate a tasting experience for an ever-growing clientele with a state-of-the-art production facility. The new building would enable Titus Vineyards to sell wine directly to their customers and engage those customers with the land where the grapes were originally grown and the process of the wine being made.

MH Architects discussed the winemaking process at length with winery staff in order to map out crucial adjacencies for production flow.  Staff was forthcoming with technical requirements for all equipment. Necessary clearances were observed and efficient routing for all plumbing and electrical components were optimized. As the equipment was integrated into the floorplan, the building itself became a wine-making machine.

As a 20,000 case production facility, Titus is generally considered a “boutique” winery where crafted production is emphasized over the volume of wine that is produced. Fruit is delivered directly to the Covered Crush area from flatbed trucks and dumped onto horizontal conveyances for cellar staff to remove any substandard grape clusters. After being processed by the destemmer, the grape “must” is pumped to 6000-gallon fermentation tanks in the adjacent Fermentation Room. During the next six weeks, glucose is converted to carbon dioxide, heat, and ethyl alcohol while the age-old process of fermentation is administered through a tightly-controlled process. Following crush and fermentation, the wine is then pumped into 60-gallon wood barrels stacked five racks tall where it will age for two years in the Barrel Storage Room.

Siting the building was complicated due to proximity to the Napa River. To mitigate flood risk, the winery was raised to sit atop on a 5- to 8-foot-tall earthen berm. In addition to avoiding high water, the elevated building pad afforded the new Tasting Room uninterrupted views over the surrounding vineyards to the Napa River and the wooded Mayacama Range beyond.

Because of the raised berm, every effort was made to reduce the vertical height of the structure and the profile of the building in general. The large roof spans at the Fermentation and Barrel Storage Rooms were achieved with flat metal trusses as opposed to sloped gables. Most of the perimeter walls of the building were constructed with tilt-up board-formed concrete. The formwork and rebar for the walls were laid out on 6-inch-wide boards to create a rich, striated texture. After curing, each of the concrete walls was “tilted up” 22-feet high and into place by crane.  Because the walls were precast, special care was taken to coordinate imbedded metal anchors to receive the ends of the metal trusses in order to structurally interlock the roof and walls together.

The horizontal lines that define the board-formed concrete walls repeat in the Hospitality Room suspended ceiling, comprised of varied width and depth wooden slats. Glass blade LED light fixtures set between the slats maintain the linear theme. Offsetting the hard concrete floors and walls, the slatted ceiling baffles sound gently and mitigates acoustical resonance allowing intelligible conversation when multiple groups of guests are present. MH Architects also designed linear pendant fixtures over the Tasting Counter and in the individual Tasting Rooms. Suspended by pairs of minimal aircraft cables, the fixtures are comprised of rectilinear wooden blocks of alder to match the ceiling with an LED light slot on the bottom.

Blending of Interior and Exterior

The distinction between the winery interior and the natural setting was intentionally blurred. Sliding glass Nana bi-fold doors span a 24-foot-wide opening between the Tasting Room and the exterior covered porch overlooking the vineyards to the west. The concrete floor and wood slat ceiling finishes continue uninterrupted between the interior and exterior. The Tasting Room space expands toward the covered porch and the crisp lines in the ceiling mirror the cultivated vineyard rows beyond.

During a tasting, guests may admire the view of the estate vineyards to the west or alternately observe the cellar staff hard at work in the Crush and Fermentation Rooms through a glass wall to the east. Flanked by grapevines and fermentation tanks, the winemaking process is integral to the guest experience. As wine production weaves with wine hospitality, the philosophy of the Titus Vineyards brand translates into built form. 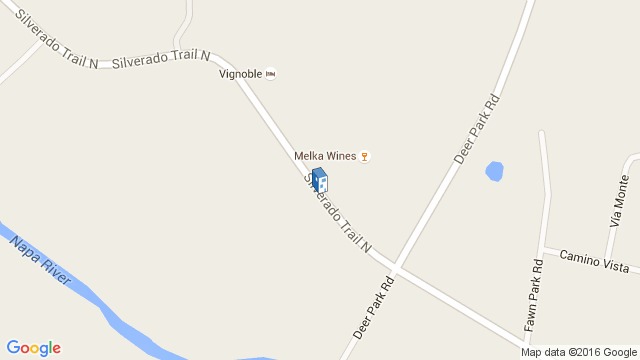