Save
9 Projects That Feature Eye-Catching Windows
Share
Or
Copy

Some of the most integral parts of a building are related to light and air. Windows, for example, can help transform a project into a more liveable or better space, providing natural light or connecting the building’s users with their surroundings.

From windows inserted into historic structures, to windows meant to give the building a distinct, landmark look, these nine projects utilize windows as a primary feature. View the nine creative uses of windows after the break.

Located in a high-density area of Seoul, Flower + Kindergarten seeks to provide a dynamic physical environment for children, while simultaneously using its distinct shapes to provide a local landmark in a homogenous neighborhood.

The Hadaway House's massing was developed from the allowable footprint and building height, combined with the sloped snow-shed roof, creating a sculptural quality for the building that is reflected additionally in its windows.

Set above the harbor and facing the Mediterranean Sea, the Jaffa Apartment is a restoration of its historic building site, and features large windows in its original arches.

Working from a site requirement to include a gable, the Gablepack mixed-use building incorporates the gable into not only its structure, but also its windows in both the commercial and residential areas.

Located on the site of a former rice factory, which inspired the name, the "Factory of Words," Vila Franca de Xira features a large triangular window, shared by all of its floors.

Completed in 1980, The Crystal Cathedral utilizes a glass enclosure to ensure that the church is open to the sky and surroundings.

The Little Big House is a renovation and extension to the rear of a heritage Victorian terrace in Melbourne, and includes four bedrooms, two bathrooms, and a study, all of which respects the neighboring historic structures.

In the V House in Mexico, a large window frames the exterior while still preserving privacy. Furthermore, the center of the house is occupied by a patio, which helps facilitate the exchange of light and air throughout the space.

Located along the top tree line of slow-growing birches in Sweden, this restaurant seeks to emphasize the relationship between the building and nature, with panoramic views of the mountains, as well as a valley to the South. 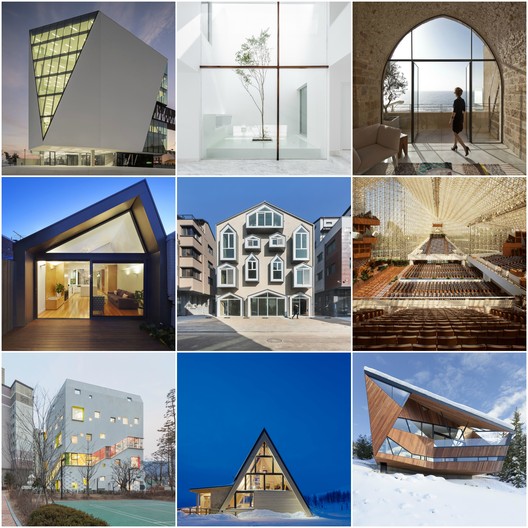