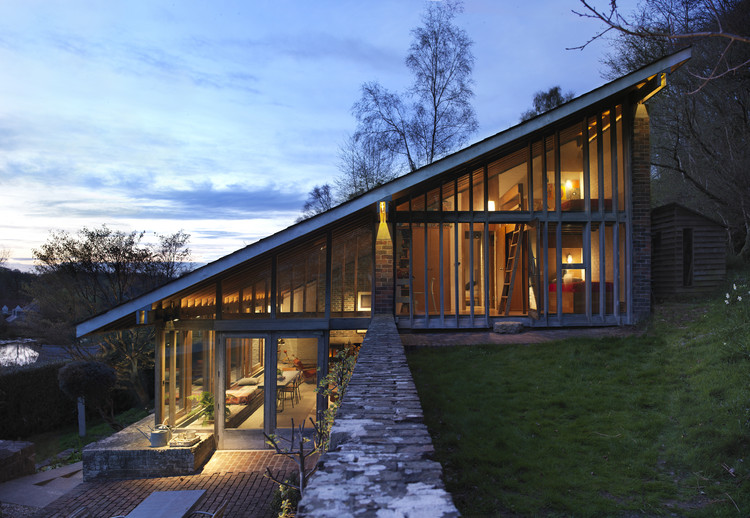 Text description provided by the architects. Ansty Plum is an architecturally significant house and studio in rural Wiltshire that has undergone an impressive retrofit and a bold studio extension.

It is a gem, consisting of two eloquent and imaginative buildings, commissioned in the 1960’s and ‘70’s by Roger Rigby, a former partner in Ove Arup’s office. The first is a one-bedroom house, designed by David Levitt and the second, a studio and garage designed by Peter and Alison Smithson.

This intensive repair, upgrading and re-organising of these buildings has brought about an 80% reduction in its energy use and resulted in a fine family home and equally outstanding studio workspace.

The buildings are radically sited on a steep wooded hillside and overlook a collection of 12thC buildings. The brick and timber house has a simple open plan with a singular plane rectangular roof following the gradient of the land. The stone and concrete studio, hedged into the slope, peeps onto an ancient woodland track.

Over the last decades, a number of changes had been made to the house while the Smithson studio had been left derelict having suffered structural failure, water ingress and decay.

Coppin Dockray transformed the house. Many sequential changes made over 50 years were removed to express the rigorous architectonic qualities that the original house eloquently displayed. They opened up the main space by removing a late addition bathroom and internal walls and created a new bedroom and study. Central and underfloor heating systems were added for the first time. The result is that this distinctive house once again displays its clarity of intent and can now be occupied comfortably throughout the year.

Coppin Dockray brought the studio building back into use. The failed roof was replaced with a new insulated zinc roof and cast concrete copings. The structure was underpinned, tanked and insulated, and services and heating added for the first time. The studio now glows a warm pink colour from the meticulously detailed Douglas Fir lining and joinery.

The studio was extended and hedged into the hill. It has created a secluded and moody concrete and stone washroom that looks into a 2m high wall of prolific native ferns. This room glows a vibrant green, particularly at night as the lighting has been placed outside the building punching light into the mossy fern bank.

Access to some of the Smithsons’ original working drawings allowed Coppin Dockray to interpret many of the zinc, stone and timber details, and in so doing have created a unique and unexpected extension that preserves the spirit of the building without compromising its functionality. Using a traditional contract with a comprehensive set of details together with small local craftspeople ensured the quality of the detailing from traditional stonemasonry to fine metalwork and internal joinery.

The house and studio are located around an historic ruin - an incomplete cottage built by a Mr Tucker in what was his plum orchard. Inside Mr Tuckers ‘cottage’ is a pond that has been re-built as a natural swimming and wildlife pond. Throughout the rest of the site, original hard landscaping was restored and extensive native planting has begun, mostly ferns, foxgloves, and carpets of bluebells and wild garlic to reintroduce and extend the ancient woodland behind the house.

Ansty Plum was built on a low budget with high ambition. Coppin Dockray’s work continues this tradition in their preserving these two small yet significant buildings. Their consistently bold and unpretentious approach to materials and detailing has ensured the buildings retain their timeless qualities.   The architect has demonstrated that for little over £1,400/m2, this house has reduced its energy use by a remarkable 80%, is now habitable throughout the year, and is an unexpected and delightful piece of modern architecture within the context of an ancient village. 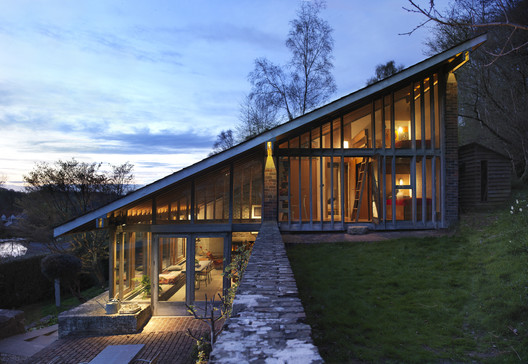