Text description provided by the architects. Urban Planning The urban-planning situation was so chosen that a generous private open space was defined by the formation of a back to the building facing the light incline of the slope and the neighbouring house to the East. The positioning of the volumes of the residential buildings above ground level is based on an analysis of the most optimal visual axes and vantage points, taking account of the concept-specific double-sided orientation of the houses.

The discreet polygonal volumes of the two buildings are the result of ideas of visual privacy and vantage points, and with their slanted roofs they constitute a single entity. The concave and convex recesses enter into a dialogue with the exterior space, producing clearly defined and encompassed spaces to relax.

A sculptural quality is generated, lending the buildings plasticity and a certain lightness. The form and the expression of the buildings therefore aim to fulfill both contextual and formal aspects.

The arrangement of the facades follows the same principles. The concept involved is not one of houses with roofs, but rather of building shapes in which the surfaces of the roofs represent a “fifth” facade.

A “promenade architecturale” leads from the shared underground garage on beneath skylights to each of the vertical circulation cores of the houses. The entrance areas in each of the ground floors unite the internal and external access routes. The polygonal form of the floor plan enables a differentiated spatial distribution. This means that the living areas are arranged around the orthogonally organised circulation cores.

The rooms between these orthogonal structures and the folded progression of the facade form a spatial continuum that extends onwards to the upper storeys.

The double-storey living rooms form the main spatial focuses of the houses. The other rooms develop outwards from them around the circulation cores, which are enhanced by an open fireplace.

The master areas arranged at both roof levels include a walk-in wardrobe, a large bathroom and direct access to the roof terrace. The exterior spaces are set in the framework, mounting the views – to the West of the site to the woods, and to the South out over Lake Zurich.

The two houses differ in terms of the contrasting alignments and situations of the volumes.

A further underground connection to the two volumes leads through the wellness area. The core zone stretches parallel to the swimming pool and contains a dressing room, bathroom/WC, a steam bath and a sauna. The access area around the 15-metre-long pool provides space for deckchairs and weight and fitness machines. An important element in the subterranean wellness area is the access to the garden area, giving the space an unexpected expansiveness.

Construction / Materialization Both buildings rise from the shared underground garages and the wellness level. The solid concrete construction beneath ground level gives way to a load-bearing framework of reinforced concrete, which is filled in with wooden elements and windows.

The ash-wood elements contrast with the smooth outer concrete surface. The structure of the facade follows a metabolic approach whereby the wooden and window elements can be replaced as wished with glazing. The majority of the inside walls are executed in white plaster, whilst the vertical circulation core and the fireplaces reveal the exposed concrete.

From the outside the individual building shapes appear like boulders, whereas the interiors are dominated by high-quality, refined materials. As a whole the aim was to create a spatial atmosphere characterised by natural materials that radiate comfort and cosiness, but without foregoing a modern, contemporary architectural appearance. 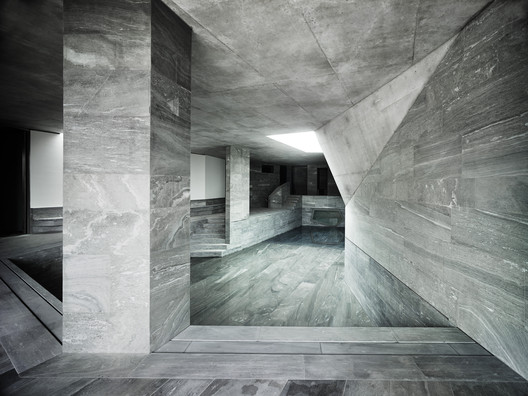