Save
Will Architecture's Future be Held Together with Glue?
Share
Or
Copy

But this isn’t the tacky glue of your model making days. These high-hold adhesives have the ability to set hard in just a few seconds, fusing building components into a monocoque structure, similar to the hull of a boat or a wind turbine blade. The resulting fabrication is lightweight (potentially up to 70% lighter), and fares better than steel when dealing with fluctuating temperatures. Glue also triumphs when comparing construction speed and efficiency, as fewer small pieces such as bolts makes for quicker, easier assembly.

Though there are a few obstacles to work out (the flammability of adhesive was been blamed for the rapid spread of the recent hotel fire in Dubai), glue is already being used in several high-profile projects to create smooth facades, such as Snohetta’s nearly-complete addition to the San Francisco Museum of Modern Art, as well as non-architectural assemblies like Boeing’s carbon fibre Dreamliner.

If high hold glue in conjunction with modern composite materials proves to be as reliable and efficient a system as advertised, architecture could see a major revolution in the way buildings are designed and constructed. Manaugh compares these materials to rigid fabrics; and if applied like fabric, architects could utilize new methods of draping, folding and tucking to create space—with no hemming required. 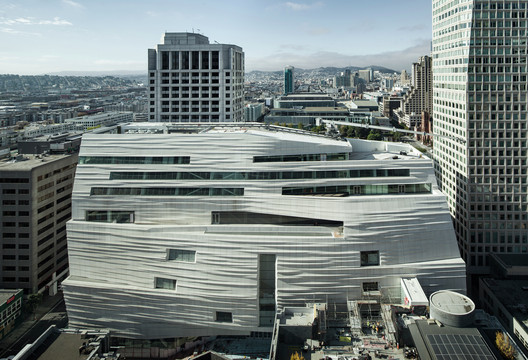