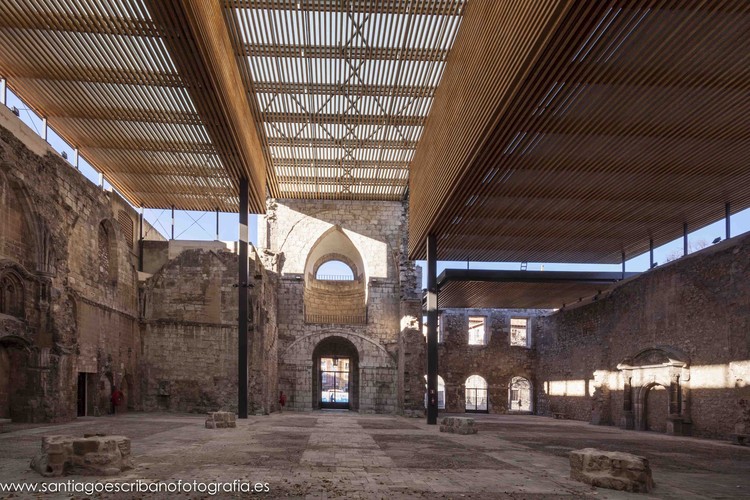 Text description provided by the architects. The Monastery of San Juan in Burgos (Spain) was raised in the 11th century as part of a group of buildings around a Benedictine monastery outside the original walls of the city. The monastery is a landmark for the pilgrims taking up the route of the Way of Saint James just before the entrance to the old city across the Arco de San Juan.

The project to cover the ruins of the church of the Monastery of San Juan, is intended to protect the architectural remains of the temple and at the same time to create a new protected space to celebrate cultural activities regardless of weather conditions.

The new roof takes the shape of a large folded plane that evokes and takes us from its essence to the ecclesiastical typology of the three-nave temple that originally existed. Two horizontal planes have been added to the folded surface in order to cover the apse and the northwest area. This set of plans, blending the contemporary vision with the respect for the remains of the church, seems to "float" above the ruin as an independent structure keeping the perception of architectural remains unaltered.

From a construction point of view, this proposal is strongly respectful towards the architectural remains. The planes of the cover are extended beyond the limits of the ruins, above walls, in order to ensure that the ancient architecture is protected. So as to affect as little as possible the archaeological substrate the cover support is reduced to a minimum with pillars located in the central nave. Limiting the number of pillars inside the church gives a clean and clear understanding view resulting from the absence of elements that could hide details of original pilasters or wall fronts.

The realization of the planes of the roof is the same in any case, whether seen from indoors or outdoors. It is based on a steel structure permanently hidden as the outside is coated with a matte translucent finish laminated glass and the inside is coated with a suspended ceiling made of wooden slats. Both the translucent glass and the wooden lattice soften the light entering the space, which causes an interesting and suitable scenographic effect. The wood lining acts as a transition between the strong ancient character of the church in ruins and the contemporary straight geometry with glass cladding of the proposed cover.

Lighting is key in the intervention. Inside, the natural light filtered through the wood lattice accentuates the covered-uncovered spirit of the proposal and highlights the value of the ruins. However, at night a careful spot lighting of the architectural remains and anindirectly projected general lighting of the wood lining gives to the monumental space a suggestive enhancement. From the outside, the translucent glass folding plane illuminated from inside acts as a lantern that reveals the intense inner cultural activity.

With this new cover for the church of Monastery of San Juan, besides ensuring the consolidation and protection of the architectural remains, the city of Burgos will have a new multipurpose and cultural exchange space of 1.300m² for the organization of different activities. 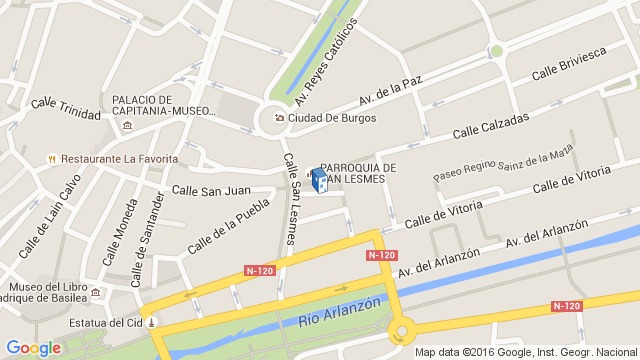