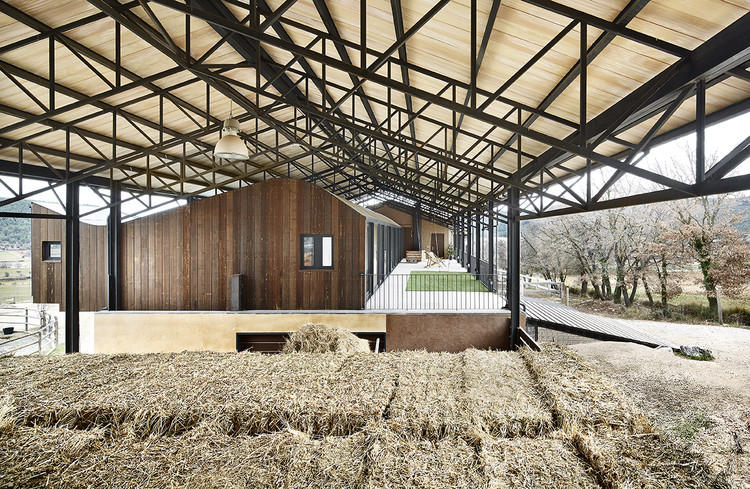 Text description provided by the architects. The addition of "La Llena" Equestrian Center, the work of architects Vicente Sarrablo and Jaume Colom, had as its main objective the construction of a single family house. The elements they worked with have been the stable -located in the lower part-, the haystack and a metal structure with a shingled gable roof that protects the project. Building on the existing instead of selecting a nearby location has enabled significant savings on items such as foundations or structure, since much of the wood that shaped the old enclosure of the barn could be reused.

"The intervention aims to enhance a large covered terrace to the south which involves some overhangs on the north side to meet the required program" emphasizes the architect. They have also used plywood panels for both load-bearing walls and partitions as well as the curved roof, with thin plywood so that it could be bent on site. The outer enclosure of the walls reuses wood from the barn, while the interior keeps the industrial wood finishing, applying only a clear varnish for ceilings and paint for vertical surfaces.

Original glazed openings done in Technal.
The geometric elements are topped by large glazed openings designed to give the counterpoint of modernity to the rural environment in which the project is located. The size and purity of lines of sliding Soleal windows, particularly suitable to withstand heavy weights and create large glass panes, complete the design of this new building. It allows the realization of large windows, up to 200 kg per pane, for greater solar contribution. In addition, the large windows allow views of the riding school from the inside and the color is adjusted perfectly to the colors of the environment. For operable openings, windows from the same series have been used, harmonizing the project. 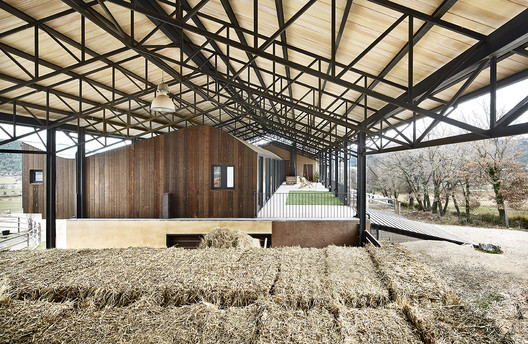