SO/AP Architectes has released its proposal for the Tokyo Pop Lab competition, which recently announced its winners. Based on the duality of environmental vulnerability and the omnipresence of numeric technology, the 3,500 square meter design focuses on the battle between mankind and nature.

Within this battle forms a “debate on the cultural evolution of our society,” a sort of conflict of ethics with regard to progress, write the architects. “In Japan this is reflected by the concepts of “Honne” and “Tatemae,” which represent the confrontation between real feelings and opinions that must be expressed in public.” In Japanese Manga this duality is used "to express a sharp criticism of society through four concepts: The Spirit, The Ecology, The Technology, and The Humor."

“Starting from a linear distortion of a Japanese traditional framework, the building is covered by a glazed façade inspired by the pattern, URUKO, which resembles fish or dragon scales.”

Learn more about the proposal here. 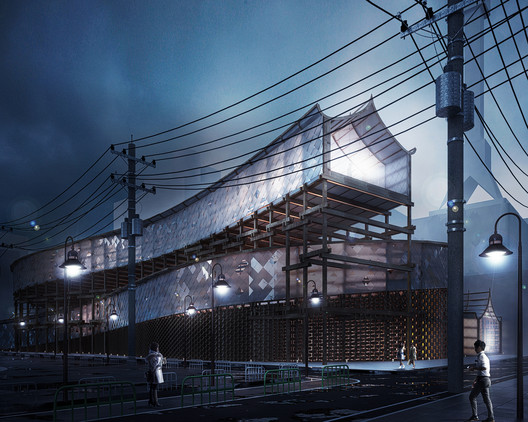