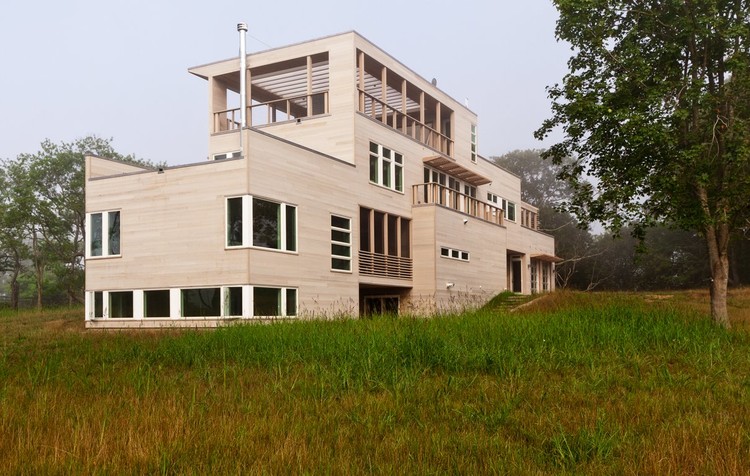 Text description provided by the architects. Located off the coast of Connecticut and Rhode Island, yet occupying a body of water in the state of New York, Fishers Island is accessible only by ferry. While during the summer months the island’s population swells to over 3000, year-round residents total only about 300. Delivery of daily supplies and materials is therefore limited. Contractors live on the mainland, creating short workdays due to the commute, thereby causing construction of a new home to take longer and effectively cost more. Leveraging off-site construction, shipping volumetric prefabricated modules—complete with plumbing, electrical, and finishes—makes for a much more cost-effective method of building on the island. The boxes were designed specifically not only for the client and site, but also to fit on the standard ferry.

The client, a family of four with 2 recent college-graduates, has extended family that also lives on the island. This house is designed to accommodate and entertain them all for generations to come. Often called “the ark” by locals, the house is comprised of eight Lego-like boxes sitting on a panelized concrete foundation that was also prefabricated. Integrated into the sloping landscape, the long and linear vessel is organized by public and private uses. The main level contains communal living spaces that span three parallel boxes, while the second floor contains the immediate family’s private spaces. The ‘east wing’ contains guest rooms and a stair down to a large bunkroom below for future grandkids. As the main gathering and entertaining area, the roof becomes another level of living space, essentially an outdoor room, partially covered and equipped with a kitchen, seating, and an outdoor fireplace.

All of the structure’s horizontal surfaces are utilized for roof decks, green areas, or solar panels. Hot water generated by the sun keeps the house warm via the radiant floor heating system during colder months. 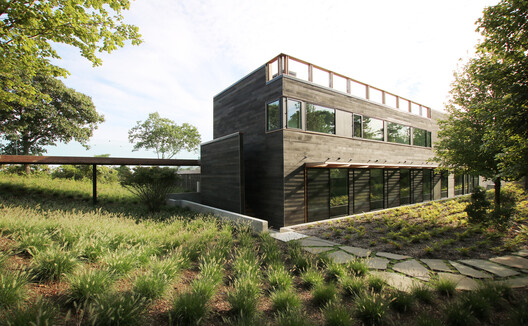