After built structures become disused or abandoned, adaptive reuse can be the perfect way to breathe new life into an old building, while conserving resources and historic value. Whether due to environmental reasons, land availability or the desire to conserve a historic landmark, countless architectural firms worldwide are turning to adaptive reuse as a solution to some of the modern problems of the built environment.

With this in mind, we have compiled a list of 20 creative adaptive reuse projects, each of which utilizes an old structure to create a revitalized form in its own distinct way.

See how a former chapel, water tower and 19th century slaughterhouse were transformed and given new life, after the break.

1. The Chapel on the Hill; Forest-in-Teesdale, United Kingdom / Evolution Design

Once a nineteenth century chapel, this holiday cottage conversion took a building heavily damaged by strong winds and rain, and turned it into a comfortable vacation residence for seven guests.

In 2004, Dorte Mandrup Arkitekter ApS won the competition to convert the Jaegersborg Water Tower into a mixed-use building. Now, the building is occupied by student housing on the upper floors, with a protruding crystalline structure added to each unit, offering added daylight and views of the city.

The House of Vans London is situated within the 150-year-old brick arches of the railway lines exiting Waterloo Station, and is a mixed-use creative venue for Vans and skateboard enthusiasts, housing an art gallery, creative spaces, screening room, live music venue, a café, several bars, and a three tier indoor concrete skate park.

Made from shipping containers, the Huiini House is a compilation of four stacked cubes, which come together to form a sustainable residence on the edge of the Primavera Forest. Because of its modular construction, the house can easily be expanded or adapted to new sustainable technologies.

Drawing from the existing urban fabric of Venice’s island of Murano, this project revitalizes a former industrial site to create two new residential complexes inside a disused factory.

In the town center of Bedford, a Moravian church and Minister’s House has been transformed into a performing arts center, with the chapel converted into a 300 seat galleried courtyard theater, and uses original materials wherever possible.

Although used as an event space for several years, the main assembly hall of the former Burckhardt machine factory in Basel, Switzerland was transformed into a multifunctional working environment, adaptable to a variety of uses.

Once a church in Chicago, Illinois, this seven-bedroom home retained original details like stained glass windows, exposed brickwork, ceiling turnbuckles, and a bell tower, all the while integrating modern conveniences and styles.

In order to integrate existing infrastructure into the urban system, EM2N reprogrammed this viaduct in Switzerland to hold commercial and transitional spaces, all on a low budget.

Utilizing a disused WWII Ferro concrete barge, Marraum Architecture created a floating office space that makes use of long-lasting materials that can survive the weathering of harbor conditions.

This artist’s studio was transformed from a 17th century barn in France, with the outside preserving local architectural identity, and the inside smoothed and painted white, so as to brighten the space.

As a part of an advertising campaign for the office Famous, a dilapidated bunker in the Netherlands was transformed into a holiday home for two families that was inspired by Le Corbusier’s “Le Cabanon.”

The old site of the Redpath Sugar Refinery, Allez UP Rock Climbing Gym utilizes the main building and silos of the site to create a unique indoor climbing facility, with climbing wall formations that resemble “sugar cliffs.”

From a 19th century slaughterhouse, Sol89 created a professional cooking school by consolidating the old building under a new ceramic roof and utilizing various other materials that recall the building’s origins.

Set within the old Benalua Railway Station, the Casa Mediterraneo Headquarters utilized a low budget to create a multifunctional space for events, including exhibitions, concerts, and parties.

In a 21-meter-tall historic castle tower in Zurich, L3P Architects created a medieval exhibition space that recalls its original atmosphere through indirect and diffuse lighting, and displays local history from medieval times to the present.

For the Franz Kafka Society Center, the basement of a small building formerly used for laundry storage was transformed into space for exhibitions, lectures, concerts, and Franz Kafka’s private library. Once a dark and small space, added skylights and new portioning revitalized the building, creating new visual connections.

This project involved the restoration and extension of three former farm buildings, and the construction of one new building, to create a converted healthcare and residential building dedicated to the elderly in Poland.

With the strategy of adaptive reuse, MA Studio transformed a 1960’s warehouse into a craft brewery, restaurant, commercial kitchen, and bar, with a courtyard and outdoor dining area. In the outdoor space, timber and landscaping were added to soften the original warehouse feeling, and indoors, existing brick walls were sandblasted and concrete columns retained their distressed paint. 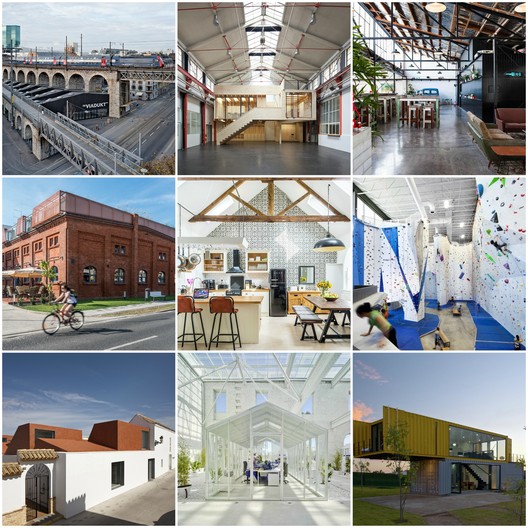