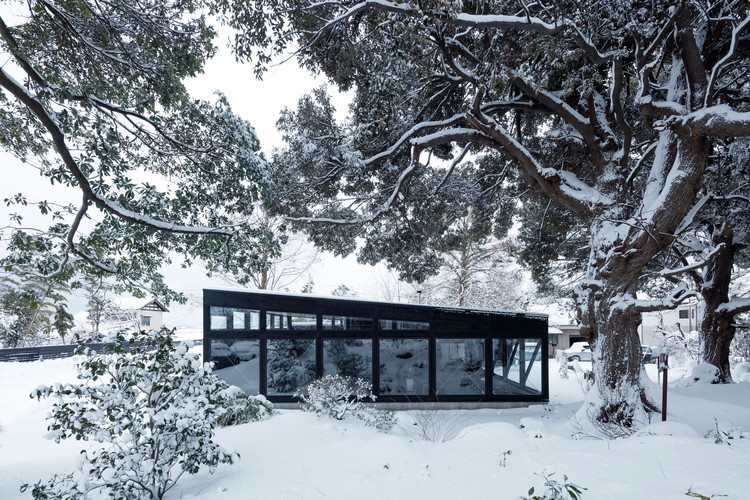 Text description provided by the architects. Isolated within a seemingly endless stretch of flat, idyllic countryside, a small but dense forest emerges into view.  Occupying 4500 square metres, the ancient copse has been preserved and nurtured in its rural setting. Nestled within this unique environment the project acts as small museum.  It consists of a market selling locally farmed produce and goods, a restaurant serving dishes using only locally grown ingredients (based on the Chisan-Chisho concept of local production for local consumption), and an event space hosting exhibitions and concerts for the community.

Gently sloping terrain and naturally dispersed trees, dappled sunlight and rustling leaves provide visitors with a comforting and dreamlike backdrop. The building is orientated to appear as if it is submerged in the forest, in order to help visitors detach from their everyday lives and experience the forest from the inside. Visitors can enjoy the sight of the roots emerging beneath their feet and leaves flourishing overhead. We considered the architectural program as Chisho, the act of consuming local produce, and have therefore designed the architecture as a platform to remind visitors of its origin, Chisan.

The site is located in an area which is subject to heavy snowfall in winter. In response, the vernacular downtown shopping streets are covered with elongated roofs, called Gangi-Zukuri, which disperse the heavy snow. The formal concept therefore derives from the notion of a extended roof unifying several shops in a street.   The same roof links the respective spaces: the market, kitchen and event space.  The Gangi roof can expand to accommodate elements which may be added in the future, creating harmony between old and new.  The project will retain a sense of ordered chaos; the architecture will grow organically as it is passed on to future generations.

The building employs the typical construction methods used in a single-storey wooden house. Widely utilised materials, metal brackets and joints, are carefully selected and positioned with respect to both the spatial and structural requirements.

The roof of the event space must be capable of supporting snowfall of up to 1m in height across an area of 120㎡. Careful consideration has been given to the placement of the cross-braced frames such that they provide sufficient structural integrity whilst retaining a sense of openness which was an essential characteristic in the brief.

Although seismic activity was a major concern regarding the structural design, it was important that east and south facing walls provided clear, unobstructed views of the forest. The gable walls have been designed to transmit seismic forces from the roof plane by forming a truss with the ridge beams. Secondary support is provided by isolated columns in the floor plan, thus removing the need for cross bracing which is present in the shear walls.

The market, kitchen and event space each have different roof forms but remain physically connected. For this reason, the transmission of horizontal forces between the elements became an important consideration. To resolve this issue, the variations in the roof levels are supplemented with reinforcing walls.

At the entrance to the site, the Gangi frame is made rigid by binding the junction between the capital and beam with a double ended bolt. This allows the structure to remain compact, resting on simple columns, without the need for walls or a braced frame 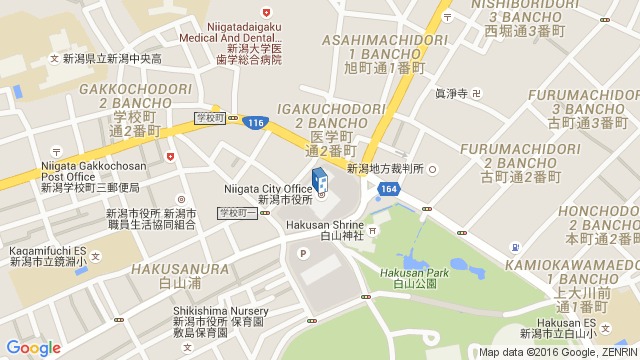 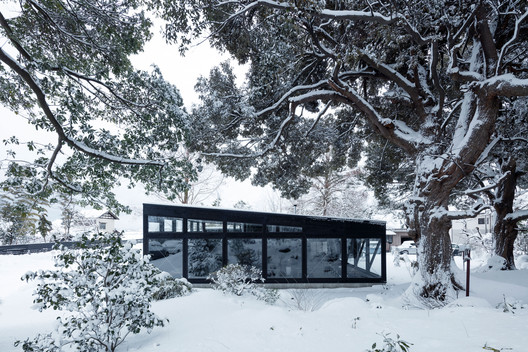