Save
Residence in the Hinode District / HYAD 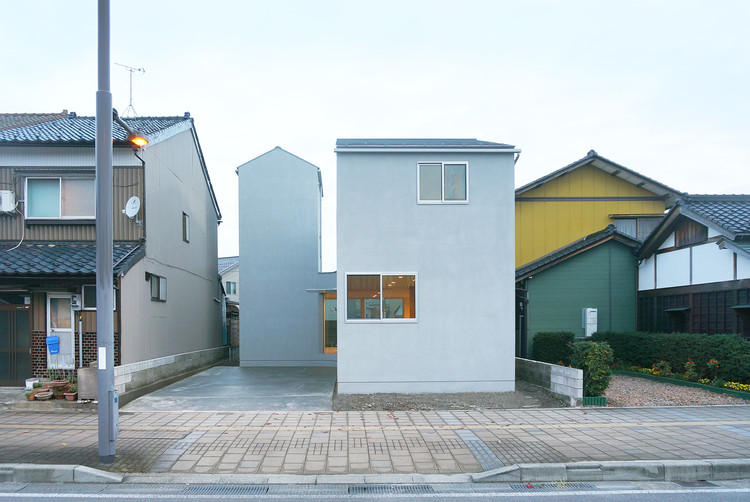 Text description provided by the architects. The lot is located at the end of a “Landscape Development Emphasis District,” which spreads along the main road running East to West through the urban center of Fukui City. The lot faces a street with two lanes each direction heading towards the mountains such as the Hakusan Mountain Range and Kunimi Pass.

All infrastructure lines are placed underground to maintain a fitting landscape. Houses along the street mostly have gabled roofs and are lined with eaves facing the street. Some “voids” are maintained as parking lots or front gardens, and a few of the buildings have flat roofs. This lot has been used as a parking lot, which was part of a “line of open lots (continuous voids),” and had functioned as the open space where light, air and gaze went through for the surrounding area.

The architecture has a two-story part and and a three-story part attached to a one-story building. Its roofs and structure are shaped in the way that suits the general landscape of the district. The ground floor creates an L-shaped semi-public space with movable partitions. The second floor has two separate private spaces with a flat roof in between.

The architectural shapes and arrangement of space, in addition to the placement of the building apart from all the four boundaries, help to maintain open spaces and voids within the lot. These “voids” are connected to the space outside the lot boundary. This architectural design keeps in light and air to the building, and this extends to the entire lot and to the neighborhood.

The open space is adopted inside the rooms as well, so that wherever a person is in the house, one can enjoy the sense of openness and feel connected to the general atmosphere of the district in everyday living. Through this method, the lot creates the sense of unity with the landscape of this neighborhood that combines buildings and voids, and retains open spaces as much as possible in the potential city landscape. The building is designed in such a way that least changes the surrounding environment.