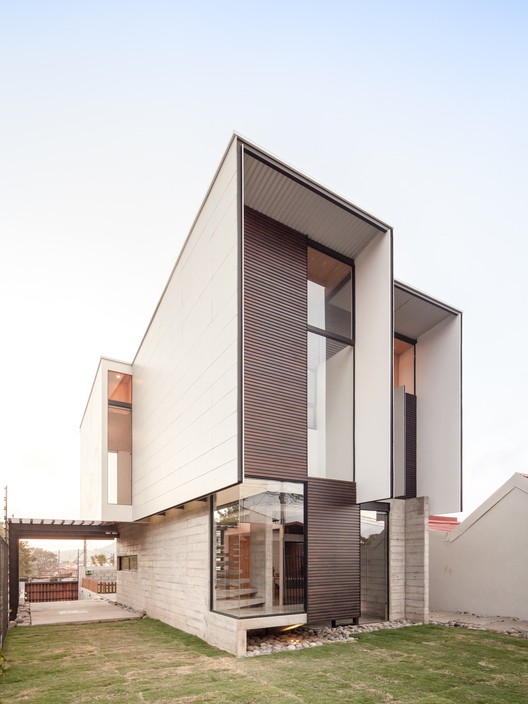 Text description provided by the architects. The house intends to reflect the general spirit of the site as understood from its history, in this case it relates more to its origin as a "sesteo" than to its more ostentatious present.  A sesteo was the place where oxcart drivers would spend the night after a long journey; this name lingered on and was given to the current upper-middle class community.

Fantastic Realism allows the argument to be a real fact, to which "an illusory or fantastic ingredient" is added.  An imaginary archeology is the excuse to unearth ancient walls, traces of a possible past that will support the present-future of the house.

These concrete walls are the monolithic base and the conceptual opposite of a collection of materials that show their industrial edges and assemblage, as a reference to the continuous bricolage that takes place in the majority of Costa Rican neighborhoods, here material progress means not only to acquire more appliances or cars, but also construction materials that are set on top of each other in apparent disorder, their individuality as single industrial pieces still readable... added space; alteration here means expansion most of the time. This procedure could be regarded as a meta language, not because it describes architectural language but because it precedes it. It also implies reducing the mediation of constructional lexicon and focusing on space as a direct consequence of the accumulation of materials.

In practical terms, the cost of the house was slightly under $ 600 per square meter, the bottom of the intermediate price range in the country, mainly due to the use of inexpensive materials and progressive finishes.

Another interest is the paradoxical uninhabited architecture which remains empty while the owners work to pay for it, a distinct phenomenon in Costa Rican middle class. As a response the house lights up in particular ways in the mornings and the afternoons when the owners are present. The challenge of using west and east as the source of light is chosen with a deep and staggered layout in order to identify the most recognizably distinct lights from each other.

In only 105 m2 one can transit through the house in parallel to the seriated planes while diagonal views expand space. A continuous going forth and retracing one´s steps at significant points occurs inside. Outside, the house needs to interweave with its immediate neighbors, thus it recedes in order to discover a zigzagging profile of the house on the south. On the opposite side, a vacant lot, the house offers a separation and a geometry that resonates with that of the existing house as an invitation to the next architect to work under similar principles.