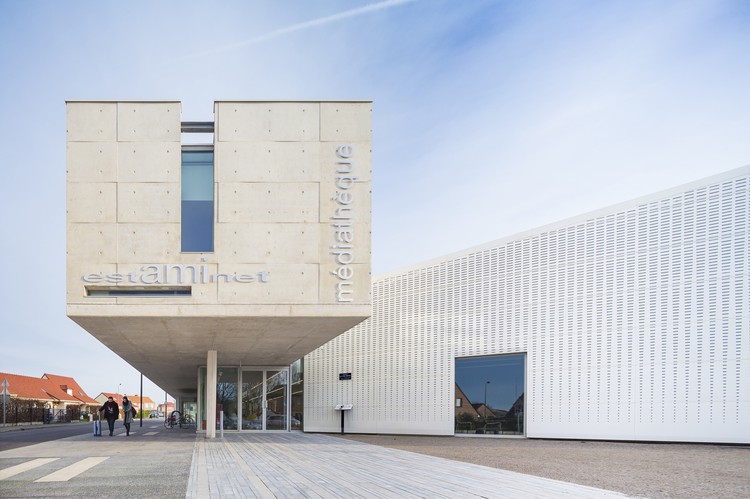 Text description provided by the architects. Implanted in the inner city of Grenay (Pas-de-Calais, France), the media library offers the municipality with a cultural equipment designed to answer the need of population. The project is located at a triangular crossroad between three old mining conglomerations which used to constitute the town. The immediate urban fabric is mainly composed of pavilions and it was essential to the contractor that this location become the centre of Grenay. Before conceiving the project, the cultural team visited several European libraries. Dutch facilities and their organization of light and numerical comfort particularly caught their attention.

A substantial part of the building was lifted in order to offer a view on the horizon and preserve a transparency toward the south of the city. The ground floor is thus alleviated and the visitor’s curiosity aroused by both the interiors and the light which filters through vertical slots. The entrance of the library and its general configuration contains no obstacles The smooth roof allows visitors to park their bikes underneath, meet, discuss and share ideas. The acoustics provide calm and serenity and it is possible for the readers to isolate themselves in multiple spaces which merge as a cluster toward the reception.

The field was remodelled in a garden at the south of the project and a patio of blue stones offers a space where one eat and drink while reading the press. The same stone is incrusted in the facades. The hall with its double light south/north is an extensible space allowing for an exhibition area directly perceived by the pedestrians, its geometry is marked by the clear volumes of light facilitating orientation. A conference room in the shape of crystal was placed on the street side for two reasons: it may thus be available outside of the library’s time window and, as it may receive an important amount of visitor, it needs more natural light than the modular exhibition area. The space of the media library opens toward the garden as a wall lighten by the radiating light of a glass canopy allows the junction with the workshops. These workshops may serve outside the library’s hours as they have their own access (garden side), each was thought in virtue of its proper function. The users of these workshops may pick their resources directly at the library bank. Children benefit of a dedicated reading room and workshop to limit the noise nuisance that their activity may cause to adult readers. The first floor gathers in an open space the cultural services of the city and the offices of the librarians.

The detail of the furniture was realised at the scales 1/10th and 1/5th allowing for a greater precision of execution and intelligent ergonomics. In environmental terms, the principles of the construction combine the solidity of the concrete, the impermeability of the vegetalized roofs and the transparency of the facade in clear glass. This provides the project with an optimal summer comfort while still favouring natural light. 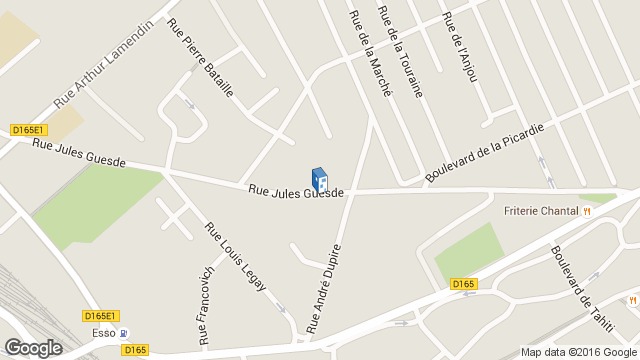 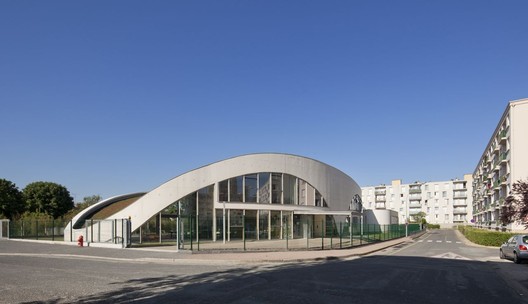 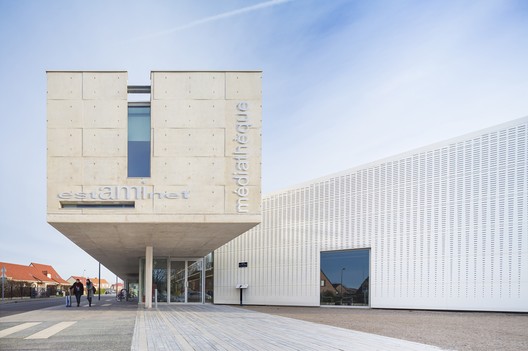