A volcanic island in the middle of the Atlantic Ocean with 140,000 inhabitants has become a stage for artistic experimentation in the last four years through the Urban Art Festival “Walk & Talk”.

The open-air festival takes place in Ponta Delgada, capital of the Archipelago of the Azores in Portugal, but the events are spread out in other areas of the São Miguel Isle as well.

While well-known street artist murals characterized the first editions of the festival, the most recent ones gathered other artistic expressions, like dance, cinema, design and architecture, developing a multidisciplinary cultural event, which has put the island under the contemporary art radar. 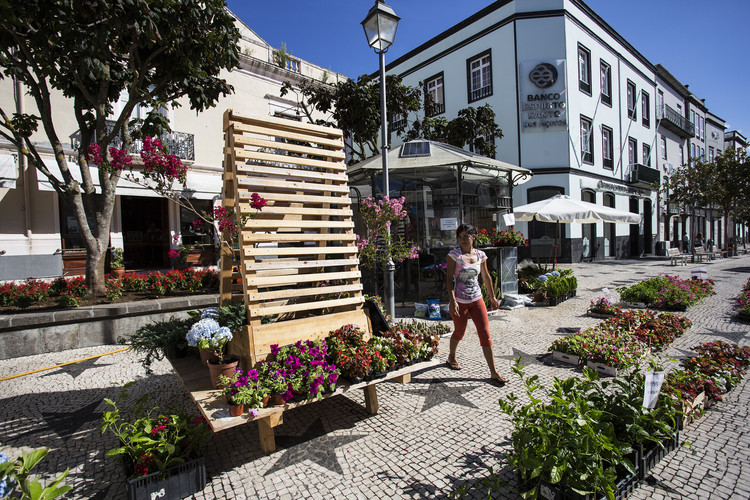 From the architects: As architecture was one of the themes of the 4th edition of the festival, we were invited to develop an intervention in Ponta Delgada – Mezzo Atelier (Giacomo Mezzadri (IT), Joana Oliveira (PT)) and Argot ou la Maison Mobile (Luca Astorri (IT)). In order to open the project to the community and professionals we proposed the organization of a practical laboratory of architecture, which we called Redesign Tradition – Play Architecture, through which the interventions were built. Parallel to the workshop we invited local and international architecture studios to reflect on the laboratory’s theme.

The project had as its starting point the vernacular architecture in the Azores, in particular the rural structures connected with agricultural production, which strongly marked the landscape and were once part of the region’s economy, but have now nearly disappeared. Our research led us to focus on three typologies, which we redesigned and transformed into urban equipment to be integrated into the city's public space. We wanted to refresh the inhabitants’ memory, surprising them, inspiring curiosity and provoking dialogue among the elders, who could recognize the original structures, and the children; and between locals and tourists who may be able to learn more about the Azores Islands culture through architectural elements that are deeply connected with tradition.

It is one of the many names used for the wooden structures where ears of corn were tied up to dry before grinding. It was very common to see it in the courtyards of families, as they were small and very easy to build. Starting from this memory we have built two different structures, a picnic table with benches where people can stay together or eat in a public space, and a bench with a flowerpot for a flower kiosk, which can hang plants as it once did with corn.

Of the old mills only the brick walls remain on top of São Miguel's hills. A few of them have been restored but have lost their grinding function. But the mills also had a social role: they were the space where people met while waiting for the ground corn, a convivial public space. Our urban adaptation of the mill creates a playful and fun archetype for children and adults, and invites people to find out what can be seen from the top while the wind-vanes turn.

The organic production of pineapples in wooden whitewash greenhouses still survives, but they are quickly getting older and few of them are restored when damaged as few people are interested or simply can’t afford it. Our redesign bring us to the sea, to the natural swimming pool “Pesqueiro” where year-round citizens swim right in the centre of the town. Reducing its scale we have transformed the greenhouses into platforms to sunbathe, sit, lie down and play. There are two platforms: one a pure white volume, reminiscent of the landscape outside of the town; in the second one, volumes were open up to give space for a deckchair or seating created out of fishnets used to catch sardines.