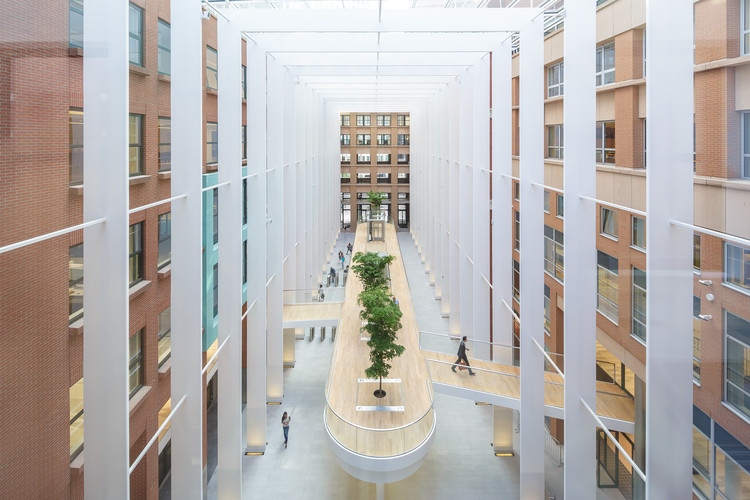 The Dutch government office block De Resident in The Hague has recently undergone a radical refurbishment. The modernizing has been designed by a collaboration between cepezed architects (atrium and design coordination), HofmanDujardin (interior) and engineering firm the Antea Group (stability, MEP, fire safety, acoustics and sustainability).

The central government is slimming down in size. Also because of this, it is more and more directed towards flexible work (place) concepts. Additionally and in accordance with overall social developments, themes such as meeting and interaction are increasingly important. The modernizing of De Resident is part of both the state shrinkage and the focus on new ways of working. The complex is situated right next to The Hague’s Central Station. It consists of the buildings Helicon and Castalia, respectively counting fourteen and twenty floors with an overall gross floor area of 55.000 m2. Castalia is a late 1960’s building block that American Architect Michael Graves revised in the 1990’s in order to house the Ministry of Health, Welfare and Sport, which returned to the building after its newest redo. Helicon now houses the Ministry of Social Affairs and Employment and was originally designed by the Soeters van Eldonk agency, that was intensively consulted during the design process.

The Parnassus square between Helicon and Castalia formerly functioned as a mutual outdoors with a darkish, limited atmosphere. cepezed transformed it into a light, semi-public entrance atrium for both departments. The connecting construction is over seventy metres long and has a height of twenty meters. If offers a complete autonomous experience with minimal impact on the existing structures. It is composed of large steel portals with a glass roof on top of these. The compound portals are positioned in a grid of 3,60 metres, have a depth of no less than a metre and are clad in white with stretched fabric and steel sheeting. Thus, they function as neutral side wings that constitute a fully independent building section when perceived in a longitudinal sight line. In a corner-spanning sight line however, they provide a good view over the original Helicon and Castalia. The ends of the atrium have transparent façades, in front of which five metre high pivoting doors have been positioned. These carry signing elements with the logo of the central government and are used to shut the entrance zone off during night time. Among other functions, the atrium houses a public café and a large ‘furniture construction’ of almost 40 metres long and five metres wide which organizes the circulation streams to the two buildings as well as the security zoning. It has a composite-clad steel construction and includes a glass porter’s lodge and lift. The roof is clad with wood and supports three large trees.

The interior rearrangement offers a wide variety of work settings. The lower levels of the office blocks house the more general functions such as meeting places and meeting rooms, short-stay work places, an education centre, library, café and restaurant, which can be used by all staff members of the central government, also from other departments. The floors above these shared functions have undergone a transformation from cellular offices to a more open work environment with spacious work areas and special functions here and there, such as concentration rooms and rooms for meeting and consulting. Also, every floor level has its own living room.

Where the cepezed-designed atrium has been conceived as an optimally neutral addition, the interior design by HofmanDujardin is fully in line with the postmodern nature of the existing buildings, for which both Graves and Soeters van Eldonk quoted liberally from the history of - often Dutch - architecture. One can discern a wide variety of references to famous Dutch artists within De Resident-complex. The Castalia-ceiling, for example, echoes the characteristic ceiling of the Berlage-designed Gemeentemuseum in The Hague. The floor of the building evokes a strong reminiscence of the floors already painted by masters such as De Hoogh and Vermeer. This incorporation of classic Dutch elements in the original design of De Resident has been used as the starting point for the interior design of the renovation. HofmanDurjardin subsequently developed the concept of enlarging Dutch classics. For this, the office selected a wide variety of both old and modern Dutch masterpieces, enlarged these and projected them on the floor plans of the different storeys. Subsequently, large areas of these have been finished based on these projections. This has resulted in a variegation of atmospheres equally bold and powerful and deeply rooted in Dutch heritage without this being obvious. The choice of paintings is also based on the work fields of the ministerial departments. For Social Affairs and Employment, themes are related to work for instance, while for Health, Welfare and Sport, subjects are related to well-being and cover for example parties or fruit still lifes. 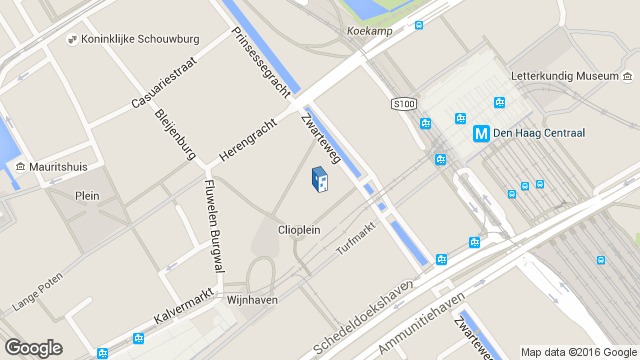 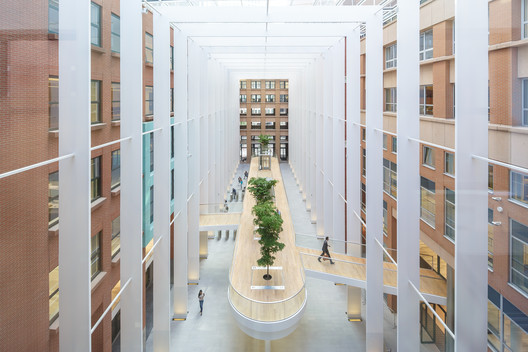