Text description provided by the architects. The flagship for Seoul-based women’s specialty store Boontheshop comprises 55,000 sq ft spread over seven floors and through its development in response to the challenging constraints of the site has become something of an icon.  Located in the prominent retail district of Cheongdam, largely characterized by its dense cacophophy of architectural styles, the developed project of an austere massing comprising two polished angular volumes in white marble serves as a powerful, calming statement.

The corner location, legally divided into two separate parcels with its principal side facing west is sited on a steep hillside, which while possessing great potential also provides serious challenges.  Site access is via a primary approach from the north leading up a steep grade along the narrow Apgujeong-ro (boulevard), a sharply inclined access from the west and south or via a precipitous downgrade from the east.

These approaches all provide considerable obstructions to the site and the building is seen at first in partiality, the slivers of polished facade functioning as a beacon for the approaching clientele and establishing a sharp contrast between the building and its surroundings.

Priority was placed upon potential improvements in the pedestrian experience as the densely urban district was previously sadly lacking in landscaped areas and footpaths. Driven by setback requirements along the primary façade of Apgujeong-ro relief was offered to the congested and narrow streets and this space was consciously used to create a series of micro plazas at street level providing four entry points and maximizing connectivity to the neighborhood.

Legally the structure consists of two buildings on adjacent, adjoining sites with limitations placed upon permitted connections above and below grade. To support a sense of connectivity and promote the impression of a singular form, two aligning glass bridges were developed and while situated to create continuity along the street frontage, they also offer an intimate retreat in the sunken courtyard, which remains concealed and embedded within the building.

The city of Seoul stipulated the individual sites’ complex solar setback requirements, impacting the initial massing of the structures. Instead of approaching these challenging constraints as obstacles to the design they were taken as opportunities to inform the sculptural nature of the building. Terraces on higher levels provide green space within the heart of urban Seoul and benefit from spectacular views of the city and Han River.

The interior concept was developed both in response to the dual nature of the projected clientele (young and upcoming or mature and established) and the duality of the inherited site. Thus, sites A and B (north and south respectively) were developed with interiors very much aligned to the projected customer base, one more raw and urban and the other more polished and refined.

Aesthetically, the challenge was to establish a new visual vocabulary for a brand which represents the highest level of innovation in fashion, design and art. Within the two freestanding structures are seven above grade levels: 3 floors of multi-brand luxury retail, a café, a private club, a cultural center, a roof top restaurant and terraces. The basement levels include a double height gallery and exhibition space along with the valet parking very much expected in Seoul society.

Due to the building’s exposure towards the west, window openings were composed and oriented with special consideration to control daylighting and minimize thermal gain. Consequently along the west façade a minimum number of openings have been utilized and all are deeply set within the stone for shading. Furthermore, within these deep set openings the glazing is angled towards the north to minimize direct solar gain.

The majority of daylighting occurs primarily through monumental north facing glazing which includes substantial openings onto the lush courtyard as well as a staggering triple height opening which serves as a window into the store for the approaching traffic from the main shopping avenue to the north. The use of a reflective coating for the connecting bridge curtain wall further reduces heat gain. The exterior cladding materials all have extremely high albedos: polished white marble and stamped, mirror polished stainless steel panels. 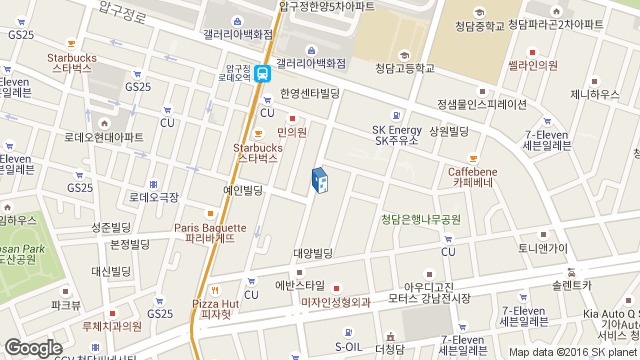 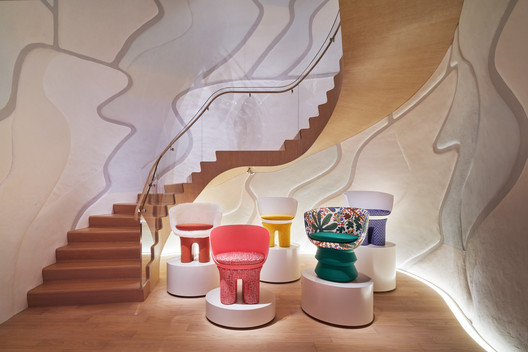