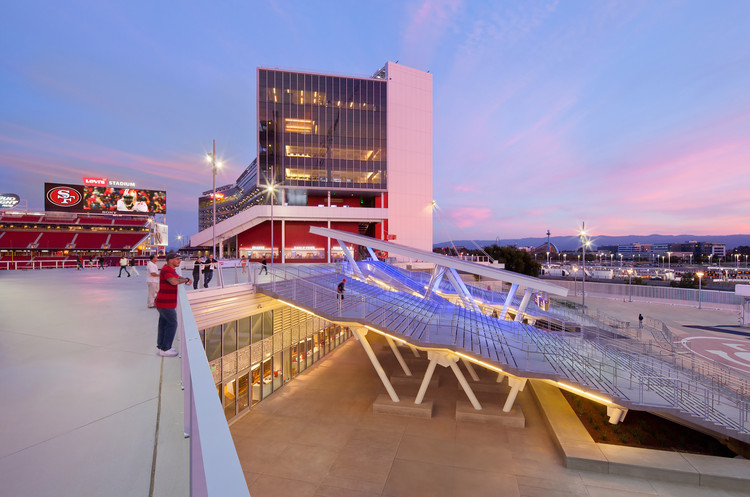 Text description provided by the architects. The San Francisco 49ers’ new 69,000-seat stadium is a sports and entertainment destination that can accommodate a wide range of events such as the Super Bowl, Major League Soccer and concerts as well as meetings tied to the adjacent Santa Clara Convention Center.

The narrow site allowed the design team to place the building front on the edge of the surrounding streets creating an urban arcade with retail and restaurant storefronts along it. The arcade connects the Convention Center, two existing hotels and other civic buildings with the stadium and nearby residential neighborhoods.

In addition to the green roof, a geothermal energy saving system, a reclaimed water system and photovoltaics designed to make the stadium the first net zero stadium for electricity of any kind. It is the first NFL stadium to achieve LEED Gold Certification.

Architecturally, the stadium is inspired by the layout of a roman amphitheater with a five story tower containing suites, clubs, press box and an accessible green roof as the proscenium. The tower is flanked by two large open plazas from where fans “climb” towards their seats with spectacular views of the surrounding hills and valleys.

The main concourse is organized with concessions and restrooms at the center dividing it into two breezy spaces: one with views of the field and the other one with views of the hills. Designed to take advantage of the subtropical Mediterranean climate there is almost no skin at all on the north, south and east elevations. At night the frame almost disappears and the building is animated by people traversing the concourses, stairs and escalators.

The building’s architectural vocabulary is defined by the expression of its structure. White steel trusses, columns, cables, plates and braces create a light network that defines spaces, decks, stairs and ramps. The innovative structure doubles the typical column bay spacing deploying thin cables in between that provide the necessary structural and seismic reinforcement.

The open floors make the surrounding hills and open skies participant in the experience and provide generous passageways. This flexible kit of parts also allows the supporting systems to be laid out independently and to be updated as technologies evolve, a metaphor of the constant innovation represented by the Silicon Valley. 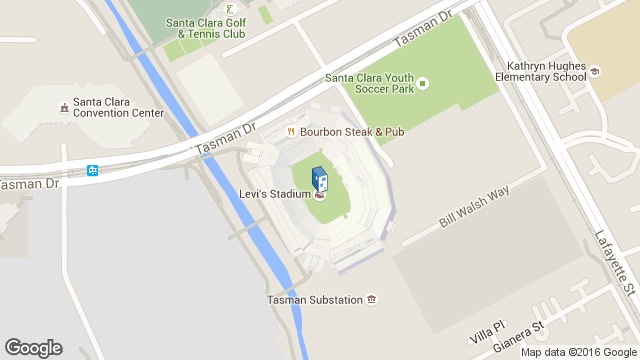 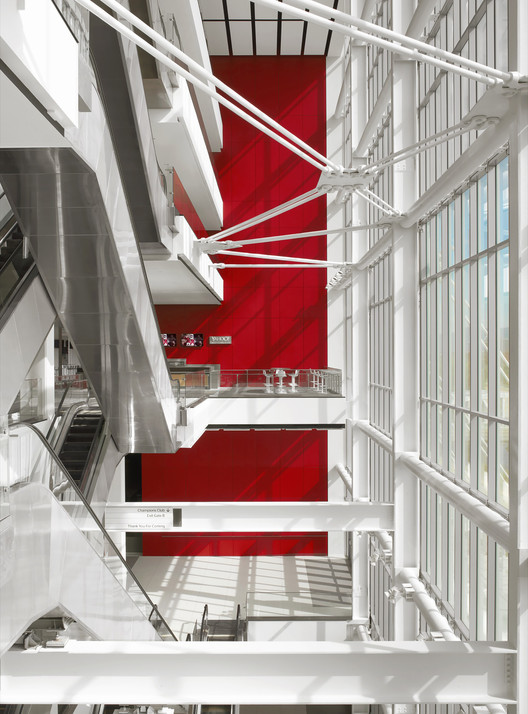