Coming off of a weekend of brutally cold temperatures in the Northeastern United States, the praising of ice might strike some as disagreeable. But seeing the aqueous creations of the Utah based Ice Castles makes a persuasive case for enduring winter’s wrath. Using a patented system, the company designs ice constructions formed through an additive process in which a substructure of icicle lattices are sprayed with liquid water, resulting in grand formations with the appearance of stalactites or sublimating gases frozen in time.

Seasonally, in four cold-climate locations in North America, the company creates castles of varying sizes that are built over the course of three to four weeks and maintained for approximately six to eight weeks thereafter. What may seem like a simple activity – after all, it’s just ice and water – is actually a complex orchestration, not unlike more traditional architecture, which involves the careful consideration of a number of strategic and site-specific factors. 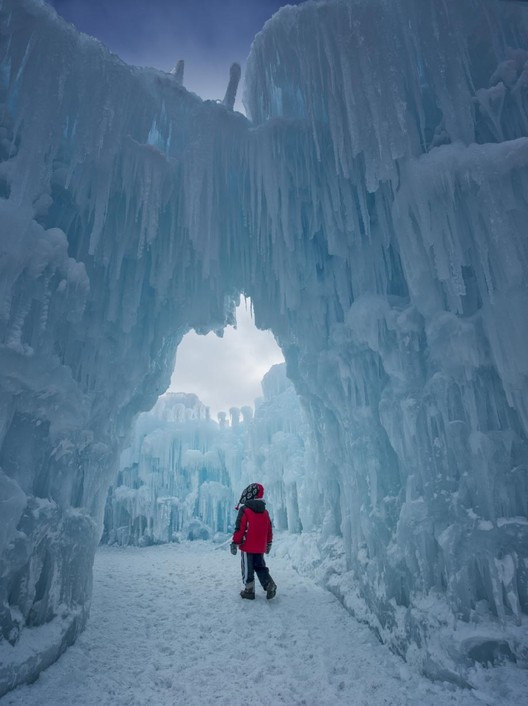 Ice Castles began in 2009 after the company’s founder, Brent Christensen celebrated his family’s move from California to Utah by building an elaborate skating rink and slide in their backyard. Speaking about the origins of the concept, Christensen says it was “purely from curiosity and intrigue. The more I played with spraying and freezing water, the more fascinating it was.”

This reference to spraying and freezing water brings up an important point: unlike other winter structures that use ice blocks or a carving method, Ice Castles are made through a more organic process in which an initial scaffold acts as a guide for the gradual accumulation of ice that slowly adds weight, volume, and structural integrity to the resultant castles.

“Locations,” says Christensen, “are chosen based on several criteria: cold-climate, relative proximity to a large population base (less than two hours away), a local advocate (such as a ski resort, chamber of commerce, or property owner), and sufficient parking, water resources, and drainage.” Additionally, once a site is selected the design itself is influenced by topography, vegetation, parking and traffic flow, and sun exposure. This season there are Ice Castles in Midway, Utah, Eden Prairie, Minnesota, Lincoln, New Hampshire, and Edmonton, Alberta, Canada.

To prepare each site, sod is laid with irrigation piping and electrical wiring that allow the castles to grow and also for lighting to be fixed and frozen into the formations. The lattice scaffolds are created with icicles grown at night in special "icicle farms," often as many as 10,000 at a time. The base of each castle is approximately 10-15 feet thick and the structure grows in stages of two to three foot increments.

“We fuse the icicles in formations – vertically and horizontally – where we intend for the towers and walls to grow,” says Christensen. “We start on the ground and as each layer collects more ice and thickens we add layer upon layer until the structures grow upwards of 20-35 feet tall.” Because the process involves ice being added to more ice, Christensen says the method is not unlike welding. “Since the process of adding new icicles involves the spraying of water, everything is melted and frozen together so that the structures are basically one solid piece of ice.”

While each castle begins with a blueprint of sorts, and the gradual buildup allows for degrees of control, the process is ultimately an organic one - “Mother Nature always has the final say,” as Christensen puts it. In the past, the company did experiment with other materials being used to further shape the constructions, but Ice Castles has found that solid ice has the most structural integrity. As these are outdoor creations, susceptible to the whims of changing weather, the castles are constantly being rebuilt throughout the season, but the overall design remains the same. And although different elements are incorporated (such as slides, waterfalls, and fountains) from location to location and year to year, the castles all share a signature flowing appearance.

The castles can be quite large (the current example in Midway is approximately an acre), and weigh in at up to 25 million pounds. So much ice and icicles might sound daunting, but the laws of physics make for a structure that is stable and safe. Icicles melts from the smallest to largest point, and because the castles are entirely ice fixed to ice, with no dark materials such as a roof, melting occurs in a slow and stable way - with no risk of an icicle coming loose at its base and falling onto the visitors below.

Since beginning in 2009, over 750,000 people have visited Ice Castles, and this year, weather permitting, people can visit the four aforementioned locations until early March.