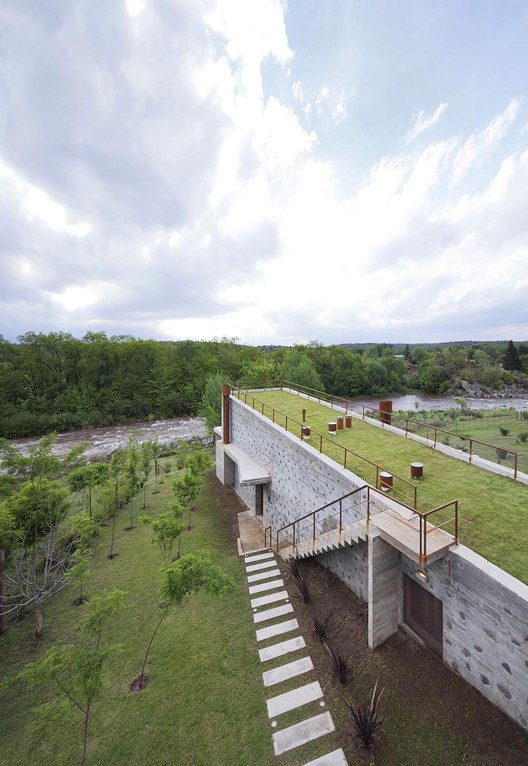 Text description provided by the architects. This is a house for temporary use, with the possibility of becoming permanent home for a family consisting of a married couple and two adult children in Santa Monica, Valle de Calamuchita. In this typical mountain landscape of this valley, the terrain, with spacious and panoramic views, has a facade facing the street towards the east, and another facade toward the Santa Rosa River on the west. With a slope of around 12%, the floor plane descends to reach the water.

The project, consisting of two volumes, one larger and more predominant and the other smaller with a vertical emphasis, is implanted on the hillside against the southern border, buried in the east end and elevated westward, perpendicular to the river, almost on top of it. Through a topographical intervention, a portion of the side folds and stretches in counter-slope towards the river, creating an upward plane with an edge where the panoramic views are fully protagonist. A slight rotation of the rectangular plan allows to face north and views to the meandering river where it is very sinuous and pointed by a rock formation.

The house is entered from the south side, through a circulation in which the concrete and stone wall emerges from the ground and rises into the air, hiding the river which can be seen as soon as one enters. The house is arranged linearly. The double height area that contains the living room, dining and kitchen is set at the lowest level, next to the water and its sound. Two bedrooms and two bathrooms are grouped one after another, penetrating the earth. A large gallery with a flat roof extends the space, cantilevered over the meadow.

As a viewing deck, the green roof on the sloping roof of the house naturalizes the artifice, forming a privileged open living area and turns present the four elements of nature.

The predominant technique of igneous stone embodies the most opaque boundaries through a wall of formwork stone, the slabs are made of exposed concrete, the transparent enclosures are made of aluminum framing and a rusted expanded metal mesh. The floors are made of wooden planks, with the exception of the gallery and bathrooms that are made of polished concrete. The furniture was fully designed along with the design strategy. Due to its materiality, the house does not require major maintenance, and its weatherization is natural and passive due to the orientations, the roof, and cross ventilation.