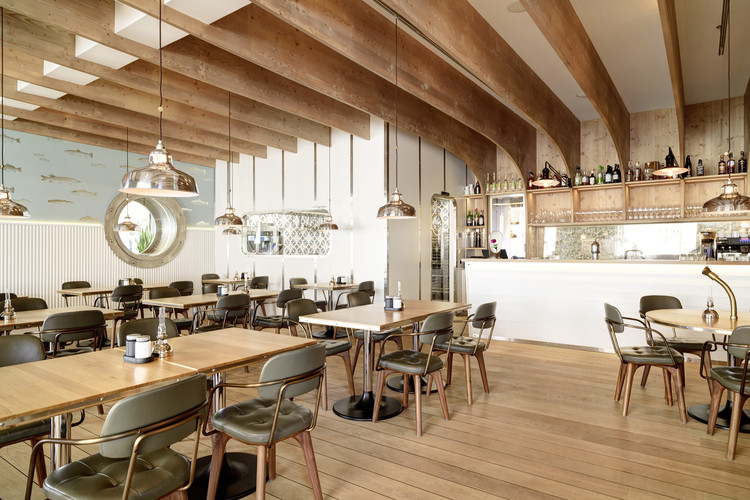 Text description provided by the architects. At the beginning of 2015, the Swiss lakeport town of Romanshorn and SBS, a Swiss corporate shipping line servicing Lake Constance, created a new, attractive urban space directly along the shoreline. Now a restaurant has been erected on a promenade built into the lake, a locale whose architecture is completely characterised by ships and the seafaring world.

Following renovation of the SBS building at the port and shipyard redevelopment, the sphere of investments resolved by the administrative board at SBS under the direction of Hermann Hess has been concluded for the time being. Investment in the new restaurant, however, is the first time that SBS clientele is being directly affected and intends to generate increased revenues.

Given that the SBS building is protected as an historic landmark, what Susanne Fritz, an interior architect based in Zurich, encountered was a former storeroom that, according to the builders’ wishes, was supposed to be transformed into a spectacular restaurant fully symbolic of nautical science.

Five portholes inserted into the side walls with diameters of up to 1.4 metres were envisaged to create transparency vis-à-vis the adjacent premises and optically enlarge the space, which is only around 150 mÇ large. Although a large-scale kitchen to provide catering for the shipping trade is already in place in the rear section of the building, a portion of the restaurant area was sacrificed in favour of a satellite kitchen to keep routes short and workflows efficient.

A curved ship’s prow adjoins the kitchen and acts as bar counter and servery in order to integrate the ‘galley’ overlaid with steel bands and metal sheeting painted white. Protruding wooden ribs form an eye-catching design feature. They visually obscure the view of the ceiling installations and merge into the rear wall of the restaurant, where trays and cabinets have been integrated.

All of the restaurant’s pendant light fixtures are flexibly and adjustably mounted on track lighting systems because seating arrangements at the restaurant vary in winter and summer. In the summertime personnel routes lead through windows that fold back to access the large outdoor terrace with seating for 100.

The terrace is spanned by a year-round roofing membrane that provides shade in the summer and keeps it usable when it rains. The windows are shut in the wintertime; more tables are placed inside the restaurant to substitute, creating indoor seating for 80. Keeping in mind that the broadly ranging target group consists of tourists, people in transit from the railway and ferry, families and local business folk, the restaurant has to fulfil the widest variety of needs on the smallest amount of space.

An alcovewith nostalgic benches, similar to those on the passenger boats that tour the lake, offers porthole views of the underwater landscape on the opposite wall area. At the table for ‘regulars’, patrons can communicate with the imaginary engine room via an original captain’s speaking pipe. A raised table with bar stools is optimal for a small lunch. Maximum flexibility is provided by the tables for two, which can be combined into larger and smaller table groupings.

To link the ship theme with the directly adjoining offices belonging to SBS, both the ticket hall and the access to offices leased to third parties on the upper floors were redesigned as well. The themes of the ship’s ribs and benches in the restaurant were seized upon once again for a shop shelf in the ticket hall.

The landscaping concept for the outdoor area bears characteristics of urban gardening. Different-sized boxes made of COR-TEN steel reminiscent of shipping crates on ships are positioned on the platform and harbour jetty, and have been planted with aromatic, scented herbs.

The responsibility for project management was borne by Benno Gmür, a delegate of the administrative board and successful reorganiser of the company. He was in charge of all investment projects in recent years.

As owner of the Hess Investment Group based in Amriswil, Switzerland, Hermann Hess is an experienced real-estate developer and investor who exhibits a high degree of social and cultural responsibility.

Susanne Fritz, a certified architect and graduate of ETH, the Swiss Federal Institute of Technology in Zurich, runs an architectural bureau in Zurich together with Patrick Schöll. For the project “Restaurant Hafen” in Romanshorn she designed an integrated service that ranges from the architecture to corporate identity development, all the way to marketing. 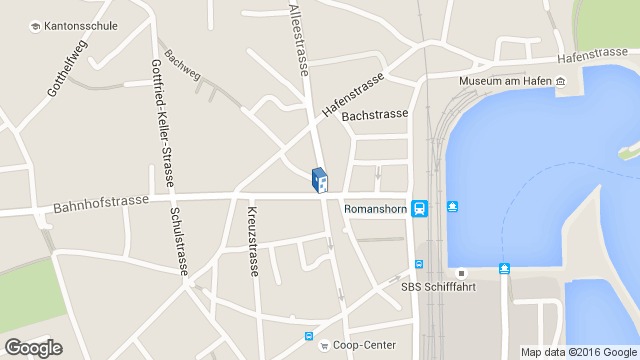 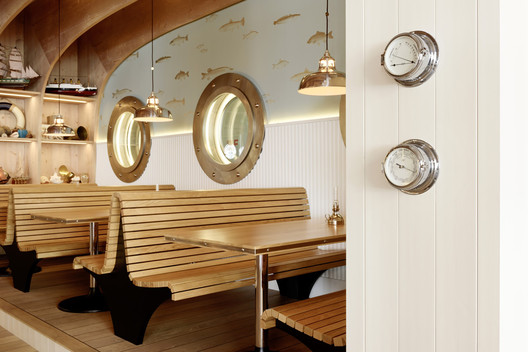