Located high in the Himalayan Mountains, the sparsely populated region of Ladakh is one of the more remote places on Earth. At over 3500 meters above sea level, the region includes terrain consisting of steep cliffs and wide valleys, and an extreme climate to match: temperatures often reach +30 degrees celsius in the summer months and drop to -30 degrees celsius in the winter. Severe weather patterns such as these typically require durable construction materials and technologies - yet with the region’s difficult-to-reach location and a construction season lasting only four to six months, importing materials becomes a costly, if not impossible task. Luckily, with help from Czech architecture firm Archide, residents were able to find that the best material for the job was one found right outside their doors: rammed earth. 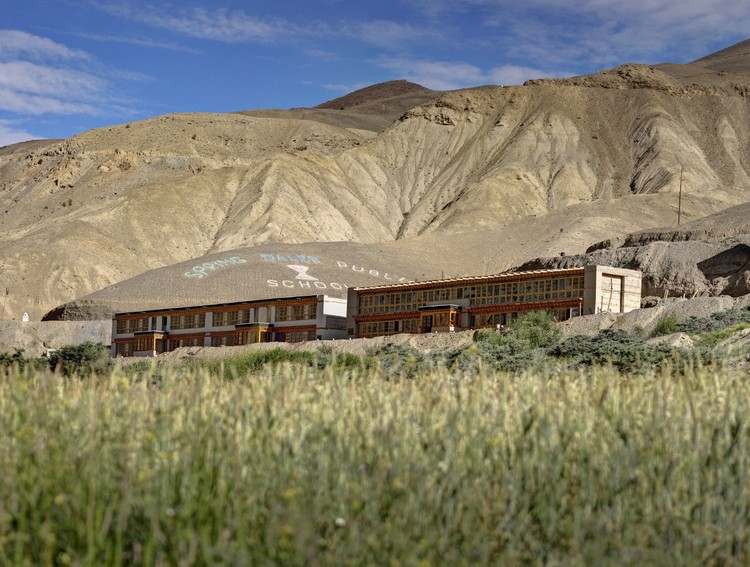 Most buildings in the area are constructed of mud brick, with wooden floors and ceilings, and flat clay roofs, though recently architectural trends have included concrete frames with mud brick infill and pitched corrugated iron sheets roofs. Yet the architects found more inspiration in traditional mud wall structures, once used widely in the region but now used primarily only as landscaping walls. The mud wall method fell out of favor due to imprecise and inconsistent results that would result in cracking and insufficient strength, but the architects saw the material’s inherent thermal and structural capabilities, and set out to unlock those qualities through a reinvented construction technique and passive design strategies.

First, Archide updated the formwork system for the rammed earth walls, testing different materials and arrangements to find an optimal strength. They discovered that using waterproofed plywood and steel struts would achieve a rigid surface that could produce a consistent result. Next, they reformulated the mud mixture, removing some of the clay to eliminate most of the wall shrinkage and achieve the desirable strength. Combined, these improvements allowed for more precise connections between walls and other building elements and created a crisper aesthetic.

The team put these techniques to use in the construction of a school and dormitory building, part of an overall master plan for an education campus in the town of Mulbekh, using design strategies to take maximum advantage of the chosen material’s properties. Overall, rooms are shallow with low ceilings and face south to take advantage of solar gain. Transitional spaces and unoccupied spaces like circulation and storage are placed on the north side of the building, and entrance halls are used as buffer zones to reduce heat loss. Windows are also double-glazed to increase insulation.

Archide designed the buildings’ wall sections to accommodate for changes based on the seasons and the time of day, separating the program into “day-use” and “night-use” functions. The “day-use” spaces take advantage of direct heat gain, using large windowed walls with louvred overhangs to allow light and heat to penetrate deep into the space during the winter. “Night-use” spaces push more of the thermal mass to the building’s south facing wall, where it accumulates heat throughout the day, and slowly releases the heat inside after the sun has set. The design also calls for a solar composting toilet, which uses the sun’s energy to create a ventilation chimney and to help dry waste.

As a result of their work with rammed earth, Archide was invited to present their project at the Advanced Building Skins international conference in Bern, Switzerland in October 2015. And, with at least 10 more of these buildings planned, residents will get the chance to test out the design technique and take advantage of new employment and educational opportunities. By utilizing a traditional material in a new way, Archide has proven that sometimes the best solution is the one found right at your feet. 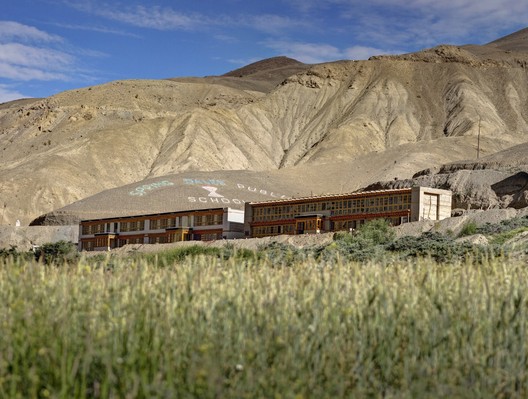