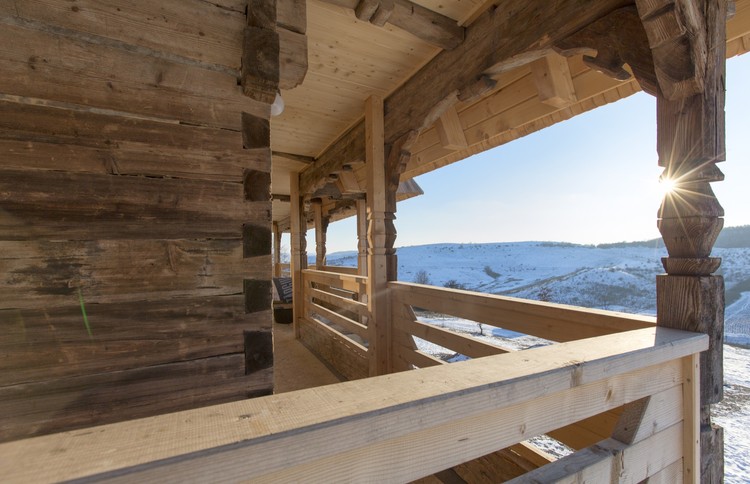 Text description provided by the architects. The rural heritage is an important theme of the present in the Romanian context (and not only). Often, constructions that had a contribution in defining the character of a specific region are looked at in a negative manner due to the lack of some basic comfort elements (central heating, proper sanitary equipment etc.). In some cultures the wooden houses are suffering even more due to the image of the perishable material or a perceived lack of durability. The traditional house is perceived as opposite to the comfort ideal: the urban villa, made of brick and modern materials like P.V.C. window frames, gypsum boards, polystyrene thermal insulation and with more generous interior spaces. For many, the urban house is becoming an ideal that may justify huge financial efforts (translated in shortcomings in other aspects), an ideal that in the majority of cases is not just about comfort, but also about the need of representation and social.

Maybe one of the most affected areas in Romania is Maramures, an historical region where the wooden houses preserved and still inhabited until now are replaced with a stunning speed by hoses with brick walls and doubtful architectural style. Even the new touristic facilities, designed for those who want to visit the area for the beautiful landscapes and specific architecture and traditions do not have anything in common with the old wooden houses with pitched roofs covered in wood shingles that in a few years will be visitable only in the open air village museums.

In this context a family of young entrepreneurs, passionate about trekking and open air activities, that wanted a more peaceful life, close to nature, decided to move to the country side. The decision was taken after a couple of years searches, the two reorganising their life in such a way so they could work from home. They bought an old wooden house from Maramures that they planned to relocate near Cluj-Napoca, Romania and to refurbish it in such a way so it could meet all their comfort needs.

In the beginning the idea of moving a house was received with scepticism by the architects: why to remove a house from its context and move it in another area? The answer was offered by the beneficiaries: the house was to be demolished and transformed in firewood to make room for a new, modern house, raised with the money the owner’s son was sending from abroad, already some of the materials for the new house being prepared on the site.

Beside the intention of saving the house, the young family also wanted the authenticity of the traditional object, of the nicely aged material that was to tell its story for the years to come in the new location. This authenticity is maybe one of the best reasons in choosing to refurbish an old house since it developed in time and it cannot be built, it cannot be fabricated.

The new site has around 32 hectares, out of which 15 are covered by forest. The future intentions are to save another two houses that would become the base of a family farm with bio products. Thus, this first house has a technical underground floor that is accommodating the central heating system and the batteries that together with the solar panels will provide the entire electricity need of the farm. The ground floor is comprised of a living area with an open kitchen, an office (that can be also used as a guest bedroom) and a toilet. The roof was brought to its original shape thus resulting two attic levels that allowed the architects to design two other bedrooms, each with its own dressing and bathroom and a multifunctional open space.

The removing and rebuilding of the house at the new site was made using craftsmen from Maramures (the area where the house was originally built). They also built the new roof structure and they crafted the wooden shingles for the roof covering. During the process, it was a pleasant surprise to observe the degree of understanding of the specific structural problems of wooden constructions proved by them. Their integration in the process was likely to contribute to the preservation of a traditional craft which otherwise is endangered, and also to send a message related to the interest in traditional wooden buildings to the communities they came from.

The owners of the house explicitly demanded that only traditional natural materials would be used: wood, sheep wool for thermal insulation, clay plaster, etc. The only modern elements were the wood window frames with stratified windows and the technical equipments.

Beside the house in Vultureni, where they already spent the first winter, the couple created the online platform www.nepotdetaran.ro where they want to create a community of people that share the same values and which already brings together several other similar initiatives. We can consider this project a happy precedent. 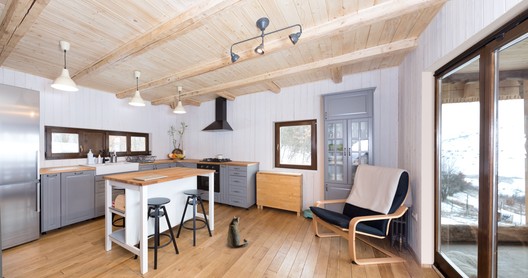 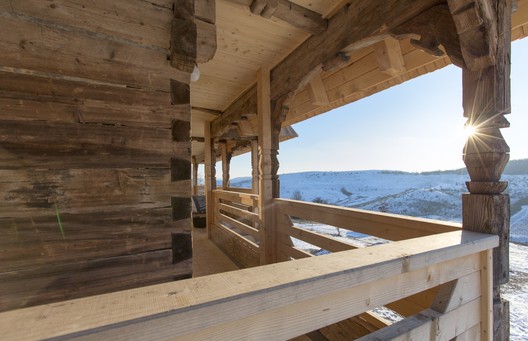