Save
House for Five / designshop 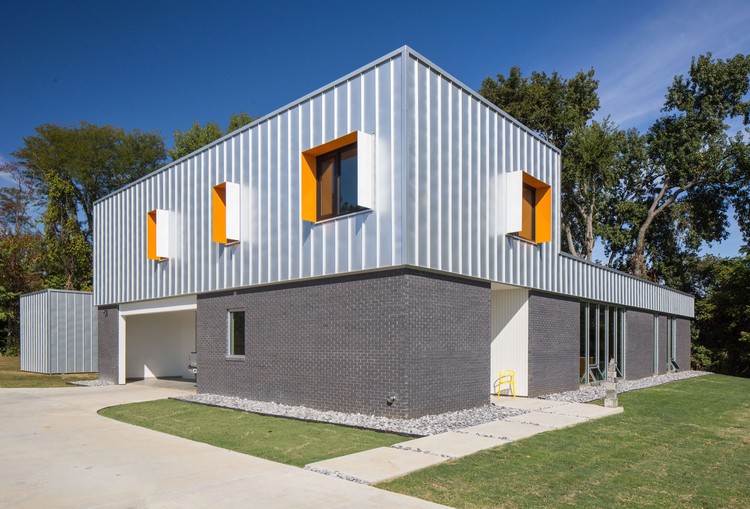 Text description provided by the architects. A family with three children recently moved to a small, rural, west Tennessee town where they sought a house more suited for their contemporary lifestyle.

Site on a 1.1 acre lot of a dead end street, the design concept utilizes an “L” shape parti to form a third and fourth side of a private rear yard, with the remaining two sides defined by the natural tree edge. A brick wall (required by covenants) forms a solid, protective base upon which a lighter second story volume rests. The brick wall is punctured by floor-to-ceiling openings and extends beyond the enclosed envelope on the northern edge to wrap a deck and garden as part of the rear yard. The second story is rendered in a much lighter galvalume skin as its volume encloses not only the inhabitable spaces of the upper floor, but seamlessly integrates into a lower volume roof system over the single story spaces.

Entry into the house is through a deeply recessed porch and door on the east, which leads past a wooden screened stair toward the kitchen, dining, and living spaces, treated as a large continuous space.

Programmatically, public spaces are centered on the ground level with large walls of glass, offering views to both front and rear yards. A master suite is located along the northern edge while an office and carport form the southern leg. The second story is a simple rectangle with each child occupying a corner bedroom. The fourth corner contains a playroom with restrooms internally positioned. The house is an exercise in contemporary architecture responding to its immediate site and environmental conditions, within a small-town neighborhood context. 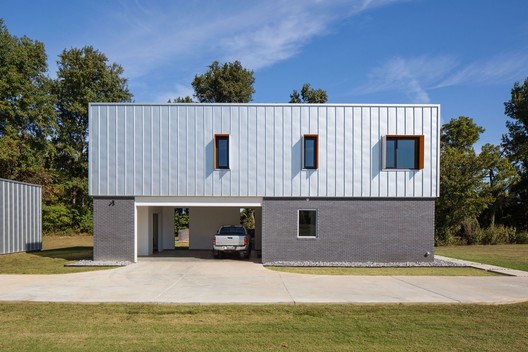