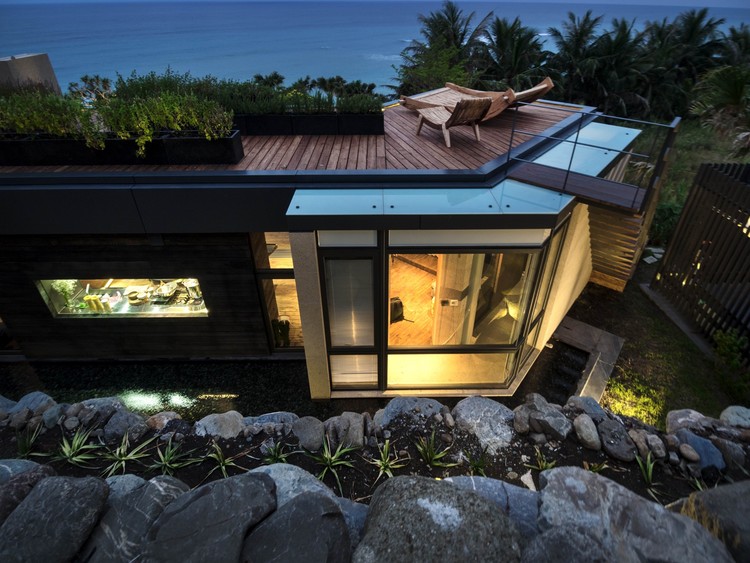 Text description provided by the architects. A’tolan is the word meaning, “a place with many rocks”, from the indigenous language of the natives on the east coast of Taiwan.  It may also be interpreted as “piling of rocks”, “building wall with rocks”, or “a house made out of rocks.”

The site is located on the eastern seaboard of Taiwan, adjacent to the Pacific Ocean.  The foundation is of a narrow rectangular shape of approximately 90 meters in length and 30 meters in width,  sitting on the north-south axis.  Following the coastline, at approximately 60 meters down the axis from the north, the structure turns 130 degrees east.  The downward slope from west to east is transformed and represented in three levels.

The essence of this project is the use of the traditional native architectural technique of A’tolan.  The rocks excavated from the site are then used to build the east-west walls spanning over three levels like rice patty terraces.

With a humble posture in front of the majestic sea, the structure extends with a relative low profile along the contour of the coastline, following its bend as if opening itself to the sea at an angle of 130.  The steel frame is cladded with the native rocks and the living roof with various herbs serves as walkway on a plateau.  Utilizing the natural background to hide the handmade elements, the wide stone stairway descends from the plateau to the open-air foyer of the building.

Surrounded by the serene beauty of mother nature, we have chosen a least invasive design that satisfies the basic shelter and food preparation needs.  Hence, the interior consists only of cooking areas and sleeping quarters.  The spaces are defined by accordion glass doors, allowing light and air to flow freely throughout.  One can be awed simultaneously by the immensity of the ocean or the stoicism of the rock wall.  A few areas symbiotically enhance the egalitarian function of the interior, such as the skylight covered shower and the outdoor bathtub just outside the sleeping areas, the al fresco dining area with the long table to the side of the foyer, and the multi-purpose area in front of the structure that can be a yoga platform or a star-gazing theater.

Through a carefully constructed symbiosis with the surrounding nature, the minimal footprint structure contains within itself endless possibilites.

Tree house, lawn, Formosa black bear, and an infinity pool with an opening of an angle of 130 to embrace the sea. 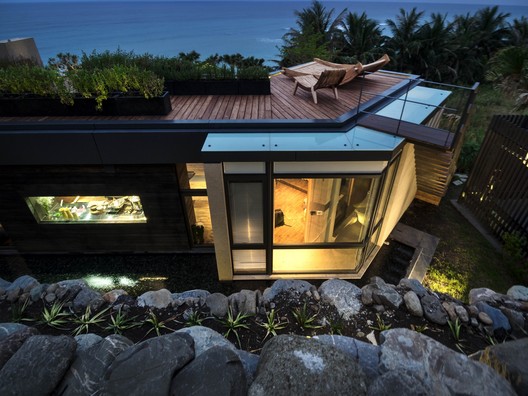