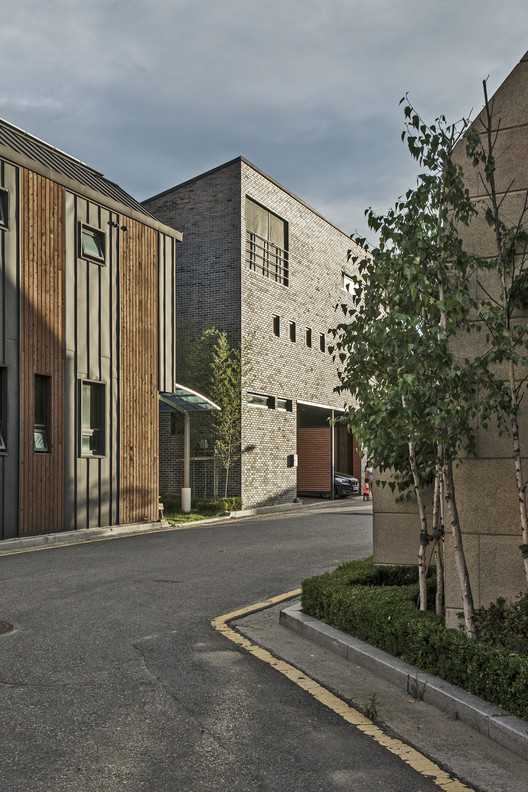 Text description provided by the architects. Two friends wanted a house of their own. They bought a land and designed a house together. However, they had different family composition, different lifestyles as well as different ideas on the house.

One had his focus on a family of two daughters while the other, staying single, focused on his private spaces. One wanted the space to be bright and open while the other wished it to be subtle and private. One hoped the house to have a variety of spaces amusingly entangled together for the children while the other wanted spaces to be simply arranged and as spacious as possible.

Yet, they had a common problem to overcome—a size of a new house could not be larger than the houses they lived at the time. The problem was unavoidable as two different families had to share a land and a house above it. Thus, the families had to first think about and decide on an actual size of all their necessary spaces by looking at floor plans. The process made them think about something fundamental—something that they had never needed to think about when living in ‘ready-made’ houses. It also required them to adapt to the size of spaces in their new house and to shift their mind from living and thinking horizontally to vertically and three dimensionally.

As such, the shape of a new house was determined in a way to secure as large area as possible within the limit allowed by local regulations. First, a courtyard that would function as a parking lot was built at the center in order to keep to the building-to-land ratio. Second, a roof that slopes upward from the south to the north following the local daylight regulation created a space for a cozy attic.
As a result, the house naturally exposed its bare red skin that was uncovered by the courtyard among hard layers of greish bricks with a somewhat cold but casual feeling.

Furthermore, unlike the exterior of the same feeling, the interior of two houses placed on the right and left side of the courtyard was designed to have a different feeling and structure from a basement to an attic in order to meet their respective tastes and characteristics mentioned earlier.

Building a house is a very difficult process. Above many reasons, the most apparent one would be the fact that there are too many things to decided on. Therefore, building a house for two families or two houses that look like one would definitely create enormous difficulties. Without doubt, the two friends and their families had to face many difficulties and dealt with them after endless conversations and sleepless nights which would surely go on for years ahead in their new houses.

We hereby deeply thank the two families who have wisely overcome all the obstacles and send our wishes and cheers for their happier lives ahead. 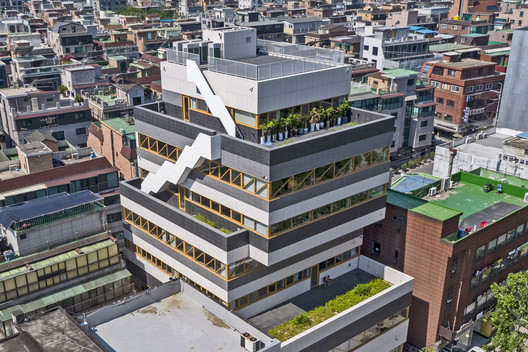