Text description provided by the architects. The Spanish city of Santiago de Compostela became a World Heritage Site in 1985. Since then the Council has been working on buildings, both public and private. Over the last years, the Council has begun working on public space too; the parks, the streets or the squares. But even so there are still vacant sites in the city, complicated sites, without any clear use or even good access.

Caramoniña is one of these sites. It is on the way from the Historical City to the nearby Almáciga neighbourhood, completed in the seventies. Both of them are little hills. But Caramoniña is also situated in the east green belt of the Historical City. We have to walk a narrow path to reach it from the historical side and go down a lot of steps from the other side. It has a difference of over twenty metres in height between the two entrances, with six platforms. And there are also several ruins of traditional constructions. There are buildings by Lopez Cotelo, close to the plot, on the east side. We can see Bonaval Park, by Alvaro Siza, on the south side, and several little terraced houses and a big school are situated on the west and north sides. The land falls from the east to the west side. There are also several trees, four wells and very good views over the Historical City.

First of all, we analyzed the slope to favour the connection and accessibility among the platforms. There is over three metres between each one. Due to the space we could design ramps to connect the lowest three of these platforms and low lying steps between the highest two. You can enter directly from the outside to the intermediate platform without steps. We can call this the long walk. We also designed a short, and quick, walk, close to the ruins. In some strategic points, between the ramps, or among the trees, or sites with good views, we put benches to rest, or to talk, or to enjoy the Historical City picture. People can even use the old stone walls to seat on.

However, the maintenance of a park can be expensive sometimes. If we introduce other uses or opportunities, citizenship can collaborate with this maintenance. If we look into the site history we can recover the old allotments and bring them back to the present. In fact these plots were the kitchen gardens of the old houses in the current ruins. The neighbourhood can use these allotments, over forty or fifty, and collaborate in the maintenance of the plot, among other advantages.

Is there anything more sustainable than a site which cares for itself? Accessibility plus activity lead to sustainability. In order to complete this sustainability, we restructure and purge the land, and reuse the old stone walls. We also recover the old wells and make a watercourse through the sequential platforms. At the end of this watercourse we shall rehabilitate two of the ruins as storage, wash room and toilet, where we will recycle the water. The wash room is important for the workers, but public toilets are also very important for children and the elderly.

We illuminate the plot as if we were in the fantastic “Campus Stellae”, with several types of embedded lights in the ground. Some people say that the name of the city proceeds from the Latin “campus stellae”, star field.

Accessibility plus activity plus sustainability give us a better quality of life. We improve the connection and accessibility between both of the neighbourhoods, those who live in the Historical City and those who live in the Almáciga. We also allow them get better and well known fresh food while they do exercise. We design a place where they meet, a secure place easy for the elderly or disabled to use.

We use stone in some of the walls, concrete in other walls and some pavements, and earth in other pavements. And we also use orchards, and onions, and lettuces, and carrots, and... 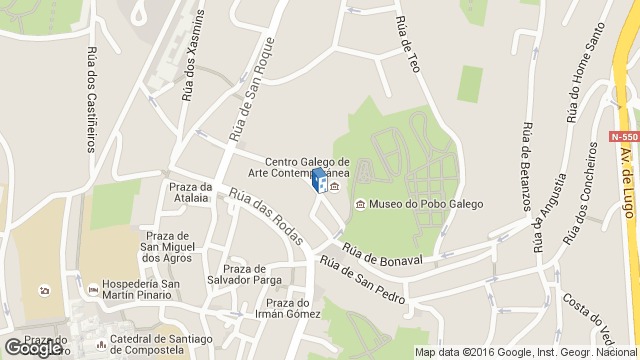 Location to be used only as a reference. It could indicate city/country but not exact address.
Share
Or
Copy
About this office
Abalo Alonso Arquitectos
Office
•••