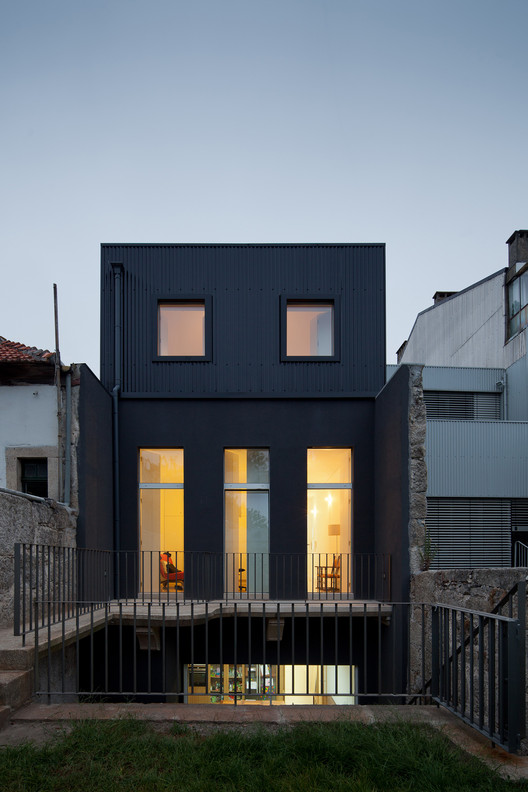 Text description provided by the architects. Casa Gate’s Project is a reinterpretation of a XIXth Century House from Porto, rebuilding a ruin, but supporting its procedures in formal and conceptual aspects that are commonly used in this typology.

The great flexibility and resilience of this model was tested here, with transformations, additions and improvements that try to establish a compromise point between the old and the new. All of these reinterpretations occurred maintaining the founding conceptual principles of the house, avoiding, therefore, the destruction of its DNA.

The characteristics of the pre-existent construction raised two main issues:

- Segregation of interior spaces: too many divisions, that give place a lot of spaces of small dimension, complicated circulations and, low incidence of natural light.

- Constructive consistence: wood structures harmed by humidity and fungus, as well as invasive interventions in the back façade.

Project’s started emerging from the ideas taken out of this diagnose, together with client’s wishes, building some conceptual platforms:

- Structurally defining elements will be kept and/or rehabilitated.

- Alteration in the main façade, to insert garage door.

- Utilization of contemporary constructive materials, but keeping the same philosophy: simplicity and resilience in ground-floor, and bigger refinement in the upper floors.

After recognizing and establishing these premises, the project defined itself automatically. On ground floor are placed the technical areas (garage/laundry), and the back façade space (kitchen) opens to the patio. The similar size/proportion of the close interaction between kitchen and patio establishes a very rich and intimate relationship.

From here on, the house articulates itself always around the staircase. As we go to upper floors, different spatial and visual relations are experimented, between spaces and this vertical spine. Open spaces, semi-open spaces, closed spaces and platforms.

These ideas were materialized with a great concern on scale. The will of keeping high ceiling’s height demanded it. The leaps between a “common scale”, high ceilings, voluptuous footers and the intimate scale of the bedroom floor were managed with care and dedication, to allow integration, rather than exclusion.

The new structure follows and respects the logic of the previous one: supporting itself in the stone walls, it sets the floor plans free from additional structural elements. The used materials reveal a high concern in reaching a formal depuration, low maintenance, durability, and, simultaneously low cost.