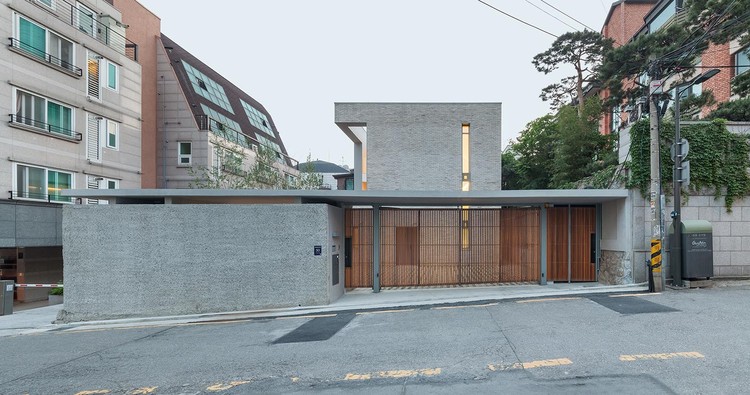 Text description provided by the architects. Today’s city transforms so rapidly that it influences the ways in which our domestic environment changes in the urban center. Accelerating commercialization and increasing land value of the central city area consequently shifts the identity of its own residential spaces. Speculative multiplex housings and commercial buildings gradually occupy the areas where used to be densely concentrated with single-family houses. As a result, we witness the existing single-home typology moving towards the suburb, and in such way, our urban center loses its heterogeneity of its housing types.

This residence is located within the block between Gangnam Financial Center and Gaenari Apartment Complex, 8 minutes walk from the Yeoksam Station. This area was once concentrated with many detached houses. However, Gangnam’s development of the commercial district and its subsequent increment of land value gentrified the area with multi-unit rental housings and mid-rise office buildings.

The client has been living in the house for his entire life, and wished to honor the will of his mother not to leave the place that has precious memories of. They decided to demolish the decrepit house and build a new home in the same place for his family to live together. The project began as a reaction to the changing urban environment, trying to conserve the existing values of the house. Such context led us to think of a new kind of single-family home typology.

The site is adjacent to a 5 meter wide road on the east. Its north, south and east sides are all surrounded by 5 storey multi-unit housings, and a house on the west side is lifted due to the level difference. Securing natural light and privacy was one of the primary concerns, especially because of the housing building on the south faces its windows towards the plot area. We were asked to divide the house to make sure that the client’s family and his mother have their own private spaces.

The house consists of three floors, and each becomes a separate volume; mother’s private space on the ground floor, a shared space, e.g., living room, dining room, and kitchen, on the second floor, and the son’s family on the third floor. We deployed the house closest to the north-west end of the site, so that it reduces the site coverage area whilst securing enough height of the building. The house is well-lighted as it is sufficiently distanced from the southern property line, and this gives an enough wandering space for the client’s mother.

A double layered large window appears on the south side elevation of the house. The window reaches from the second floor to the third floor, widely open towards the sky. However, we were attentive to the private spaces such as its bedroom and bathroom, refraining from an uncomfortable gaze from the outside, and yet still letting the light in from the sky. The second floor’s living room and the third floor’s study are positioned at the south-east corner, whose elevation is broadly open, allowing a plenty of natural light to come in.

Bright colored bricks are used as a main material of the house in order to give a sense of placidity. It also supplements the limited horizontal opening, while alleviating a visual incongruity which might have been occurred due to a strong form of section on the south-east corner. The wall facing the road is a mixture of chipping concrete and red cedar louvers, offering an illusionary depth of the wall. In such way, the house and its surrounding walls are interacting with the neighboring environment, while at the same time, calmly sitting on its own land. 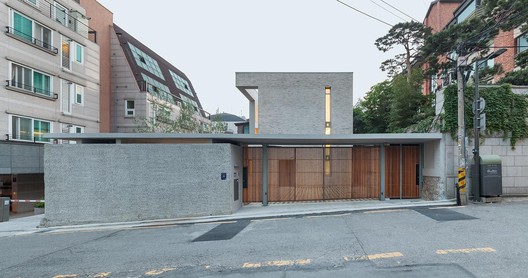