Bee Breeders has announced the winners of their Baltic Way Memorial architecture competition. The competition sought to create a reminder of the impact of the 1989 Baltic Way, a peaceful demonstration that occurred when people across three Baltic countries joined hands to form a human chain stretching more than 600 kilometers. Each entry was judged on how successfully it both drew on the seriousness of the Baltic Way event, while simultaneously representing a hope for the future. The jury evaluated all entries on a number of criteria including clarity and strength of concept, originality, quality of work, appropriateness to context and scale, and its strength as a public symbol to memorialize the event.

The winning submission stood out due to its monumental nature as a representation for hope for the city of Riga, according to the jury. It intertwines the program into one whole, while making a statement for the city. The tripartite design is a metaphor for the three Baltic states, Latvia, Lithuania, and Estonia, which join together as they reach toward the sky representing their link under the USSR at the time of the event.

The second place design is a simple proposal which creates a unique environment that encourages personal reflection, write the jury. This memorial places a rigid series of repetitive walls that line up across the site.  The result is an emotional impact on its visitors who can experience it from the water, by walking through it, or by driving by it.

This proposal conveys the power of the Baltic Way protest by creating a path across the site which represents the 675 kilometer-long human chain. This aspect of the protest is materialized with one block of marble for each of the 675 kilometers on the full route. This gesture is continued with a red cube in the center which houses various memorial functions.

Read more about the winning entries and honorable mentions, here. 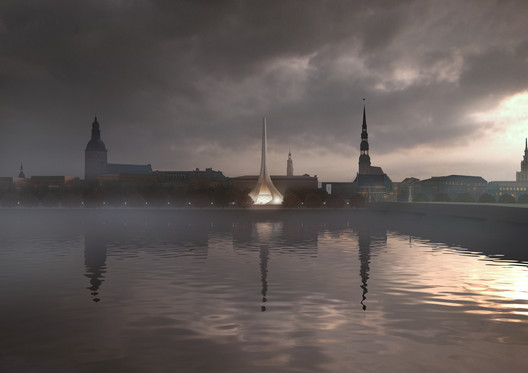