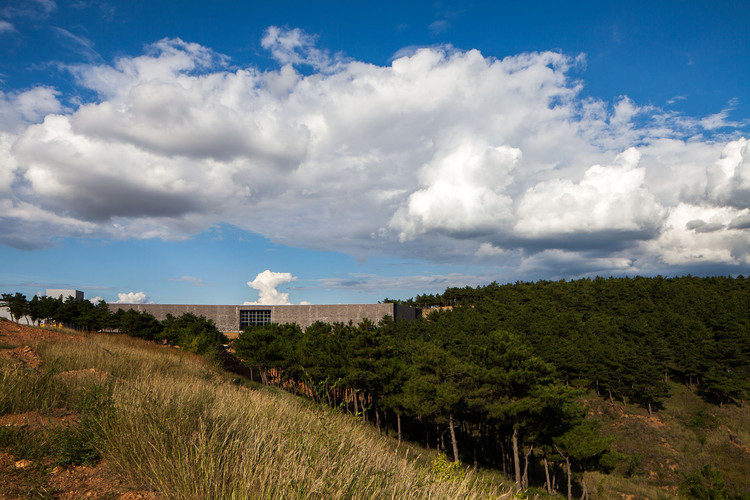 During the years of the Japanese invasion (1931 to 1945), tens of thousands of miners died due to over work and maltreat, leading to a large number of mass graves scattered in Liaoning province. This includes four mass graves of about 70, 000 miners in Fuxin city.

As a witness to the war crimes of Japan and cruel persecution of miners, this grave site was enlisted as one of the National Cultural Relic Protection Units in 2006.

Built in 1968, the original shelters only provided a simple covering for the graves, with little consideration to the protection, exhibition and commemoration of the mass grave. After nearly 50 years, the shelters were in a terrible condition with broken doors and windows, falling walls, a leaking roof, poor drainage, etc. Also there were few lightening equipments,  fire and security control. Moreover, the bones suffered from wet soil and wind corrosion as well as air pollution. In such a narrow space, the bones were exposed directly to bacteria and carbon dioxide introduced by visitors to the site.

In order to protect this important site, with the approval of State Administration of Cultural Heritage, the two shelters were redesigned and rebuilt in 2015.

The three pits, with hundreds of bones, still brings strong discomfort to visitors even in dark interior space. The misery of the loss of life, the pity for those whose bones have to be exposed longtime after the death , and the painful imagination of how the miners were maltreated, all shock visitors.

It is hard to recognize every miner from their neatly stacked bones. The whole of them being called “Miners Who Died in Accidents” or "Miners Who Died in Opposition to Japanese Violence ". The subtle differences between bones indicate the uniqueness of each individual. While protecting these bones, could the architectural design reflects also the value and suffering of individual lives in collective massacre?

Based on solving the existing problems, our design takes into consideration the requirements of space and equipment operation to appropriately protect and exhibit the site. We aimed to organically integrate the protection space and exhibition space in the aspect of spatial organization and circulation placement. For the purpose of expressing the solemn and respectful atmosphere displayed on the site, a concise architectural form with grey color is created.

The architecture lies on the hill slope. Making use of the original roads and vegetation, the architectural arrangement inherited the characteristics of layout and orientation of the demolished shelters.

With nuance difference in miners' grave, the two shelters both organize spaces in a symmetrical way. Before the main entrance is memorial hall. slopes or corridor are used to prolong the circulation and connect memorial hall and exhibition hall. graves are separated and protected by glass curtain. Office and mechanical room are located in independent zones.

2.1 "Protective Shelter for Miners Who Died in Accidents"

The shelter is a one-story building. All the spaces are arranged around the two pits. Behind the main entrance is the central Memorial Hall. Two exhibition halls, - the north and south-, both with a grave pit in the centre, are arranged symmetrically in the two sides of the entrance. They are also connected by a long corridor of meditation in the west. Equipment rooms and office are displaced at the east side.

The two pits differing in size and are not placed symmetrically to the original entrance. The orientation of the new shelter is parallel with the entrance. On the basis of triangle module of 25,24,9, the two pits' space are enlarged to be displayed symmetrically on the two side of entrance. The new redefined plan is symmetrical, which leads to a concise and straight building form. This pure geometrical form, with green hills as the background, has a simple power-the tranquility and stability of horizontal lines make it easy to create a solemn atmosphere.

The entrance built in 1968 is conserved to be the witness of special historical time, integrating half a century of history into the new shelter. To respect the original one which is not big enough proportionally, a new outdoor entrance space with the shape of / \ is naturally formed. Two side walls made of bare concrete erect in the position of / \. This grey space can be used for outdoor memorial activities.

Behind the entrance facade, between the two pits, there is a memorial hall, the cone-shaped space of which has the effect of spatial elongation. The holiness of the hall is intensified by the bare concrete walls.

Through the varied-sized holes in the concrete walls that enclose the exhibition hall, visitors could have a bird’s-eye view of the grave.

The sloping corridor with steeply sloped walls is an architectural metaphor for the dangerous mine road. Light cast from the roof, and light spot on the walls and floors, may let the visitors desire infinitely for the luminous world.

The mass grave is enclosed by exhibition hall with a necessary scale to minimize the building mass. The two spaces above are separated by a glass curtain, so that the physical condition of the pits could be controlled independently. The main body of the pits is also insulated by underground concrete walls and tunnels to isolate the groundwater. These solutions are good for the protection and exhibition of bones.

Walking clockwise around the grave, visitors could finish the ceremony of respecting the lives of ancestors.

The narrow corridor of meditation leads visitors to the other end. On one side there is a grave pit seen through holes in the concrete walls, and on the other side, there is a grey stone wall with numerous holes to let light in. In the middle of the corridor locates the west door and terrace that open to the green valley. One side is death, and the other side is life.

2.2 "Protective Shelter  for Miners Who Died in Opposition to Japanese Violence"

A shelter, a one-storey building with cubic architectural form lies in the foothills. Inheriting the massing proportion of the original building, and enlarged properly, it protects and exhibits appropriately the perished miners.

From north to south, there are the Entrance Hall(Memorial Hall), Corridor for Meditation, Exhibition Hall, Multimedia Room and Mechanic Room, all of which are organized in a symmetrical way to intensify the sense of commemorating. the nuance change of light environment, from bright to dark to lightly bright, en route of the visit helps to create a deep and silent atmosphere like mine pit.

It has a symmetrical main facade. Echoing the language of the other shelter, Its entrance also has the shape of / \, two side walls made of bare concrete erecting in the position of / \, and a wall made of grey stones standing in the middle to separate the entrance and exit.

The corridor of meditation, connecting the entrance hall and exhibition hall, functions as a prolonged ceremonial route, which could have visitors prepared psychologically before seeing the grave. Glass on the roof makes this corridor vivid with light spot on the walls and floor.

The grave pit is surrounded by a glass curtain and enclosed by the exhibition hall. The east facade is made of grey stones with plenty of small holes to let the light in. On the west side, the Exhibition Hall is separated from an exhibition gallery by two walls.

Office and mechanical room are located in independent zones in the southwest corner.

The use of bare concrete and grey stones intensifies the solemnity of the shelters.

The bumpy surface of grey stones add a subtle texture to the shelters. The main façade consisting of grey stones with six sizes are laid with many holes, the number of which increases from top to bottom. It brings a fascinating luminous effect, with numerous lights symbolizing the soul of the dead, into the interior space. The sharp contrast between layers of grey stones and layers of white bones moves every visitor. The harsh but delicate stones, faded into the background, symbolize different individuals composing a whole entirety with their bones.

however, due to the especially short construction period(these shelters should be completed before the military parade for 70th anniversary of victory of war over fascism parade), bare concrete walls are badly constructed and covered by grey mortar under the order of local authorities. This weakens the roughness and sensitiveness of material itself. 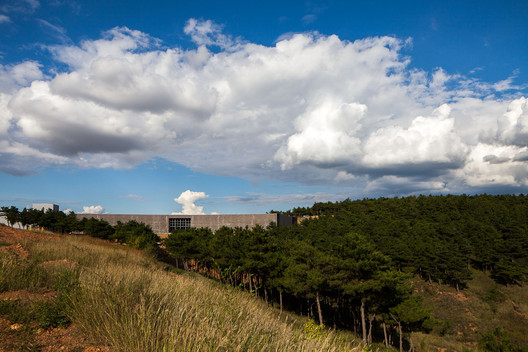