Since the unveiling of Kuma's proposal, Zaha Hadid Architects (ZHA) has been concerned about similarities in “the structure, layout and numerous elements” of both designs. In one case, according to The Telegraph, Kuma's design integrates a unique design element that was specially designed in a month-long process by ZHA software that identifies the optimum focal point for the 80,000-seat stadium; Kuma's design is offset just .39 inches from ZHA's original placement, thus causing concern that Kuma borrowed this design element from ZHA's proposal.

"If you take a look at the designs of Zaha Hadid and of myself you see very different impressions of the building. The reason for this is that in Hadid’s design you see the audience parts separated into two sides which rise up. But in our design we have very much tried to keep it as low as possible," Kuma continued.

"In regards to the actual structure of the stadium, our design utilizes three layers; this ensures that at this scale we can still keep the audience and the athletes close... When we looked at the 11 entries submitted to the competition originally, seven of them were using this three-layer design. It is the most reasonable way to ensure that in a stadium of this capacity the audience and athletes feel as one... Zaha’s design also utilizes these three layers within the stadium structure. When we look at sightlines and calculate the angles automatically it comes up with the most appropriate, so if we consider this then it is quite natural and appropriate that there are similar angles in Hadid’s design and my own."

"One further aspect which is similar is the details of the rows of seats. However, according to Tokyo’s fire prevention acts, this is very much set. Only certain layouts can be permitted within these limitations," says Kuma.

News via AJ and The Telegraph 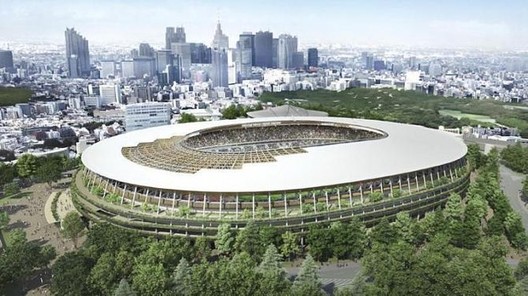