Zaha Hadid is facing new hurdles regarding her scrapped Tokyo National Stadium design; according to the architect, the Japan Sport Council (JSC) is withholding an overdue payment until ZHA agrees to relinquish ownership of their original designs.

After working on the design for more than two years, the British practice was decommissioned from the project over cost objections last summer. Since, Japanese architect Kengo Kuma has been reassigned the project, offering a design that ZHA says is suspiciously similar to their original proposal "in the structure, layout and numerous elements."

Now, the JSC has requested ZHA agrees to new "Compliance Rules" that would allow the stadium's new architect to "use any product of work ... regardless of its copyright."

As the Telegraph reports, the letter from JSC requests ZHA permits them to "use Project Work freely, without additional payment or restriction (includes alteration and any other use) and mutually agrees that [Zaha Hadid Ltd.] will consent without objection." The JSC plans to withhold payment until ZHA agrees to the new contract.

"Trying to grab the copyright and withholding payment is tantamount to extortion," a represented of ZHA told the Telegraph. The JSC has yet to comment on the controversy.

News via The Telegraph 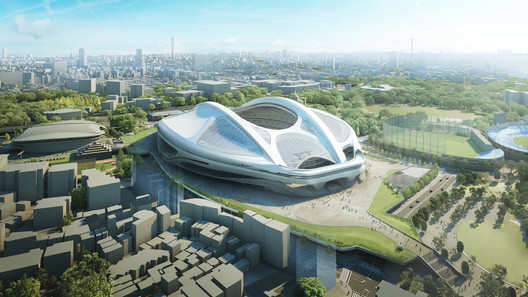