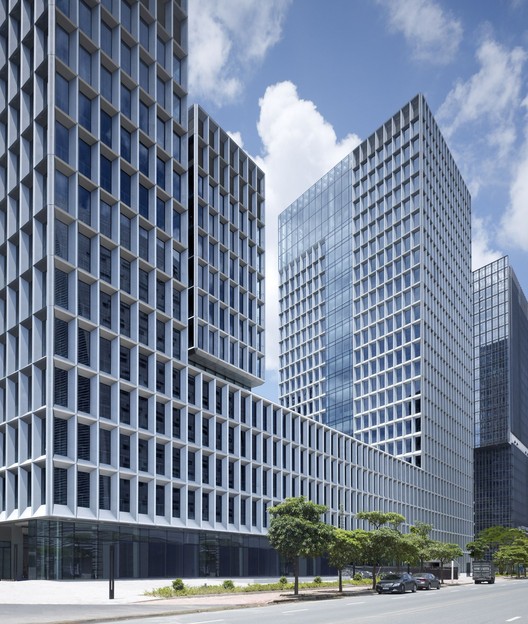 Text description provided by the architects. The focus of the Shenzhen metropolis is on national and international IT research and development. A core project for strengthening the IT industry is the „Shenzhen Software Industry Base“, for the first plot of which the architects von Gerkan, Marg and Partners won the design commission as part of an international competition in 2009; this has now been completed.

The project is situated in the western Nanshan district and enjoys a favorable strategic location due to its proxi- mity to Hong Kong, the international Bao’An airport and the eastern financial center. The urban design for the entire precinct, of which the gmp design forms a part, specifies a dense development of research, administration and service buildings comprising a total of 18 towers. These towers are grouped around a spread-out, low-rise development in the center, with the first plot now completed, and with its three towers forming the north-eastern end of the quarter.

In order to create an attractive, compact location for smaller IT companies, public and internal communication spaces, planted areas, daylight and natural ventilation played a key role in the concept for the project. The overall intention was to create a coherent complex that links all tenants, but this was hampered by the fact that the site is divided into three parts by roads. The design overcomes this problem by placing one tower on each part of the site and linking the plinths via bridges to create a unified development.

The buildings feature a series of bands in the elevations, resulting in a dynamic composition, with the spaces in between forming diverse multi-story atria, while also achieving a horizontal multi-story link between all towers. These meandering building volumes and their bridges create urban squares to the north and south, which also provide the addresses to the towers.

While the towers accommodate the office areas, special functions such as conference areas, restaurants and small shops are located in the linking plinth structure, which can therefore be reached directly from all towers and from street level. In addition, the roof terrace on the 6th floor serves as a meeting point and connection between the different towers. The higher towers in the west and east of the complex, measuring 90 m and 100 m respectively, are topped by three-story sky lobbies, which accommodate additional restaurants and provide a view across the city to the Shenzhen bay to the south.

The façade has been designed as a uniform metallic structure enveloping the buildings and reinforcing the sculp- tural effect. The grid has been composed of prismatic, perforated metal sheet elements that cover all openings for natural and mechanical ventilation, thus making it possible to provide large, un-divided glazed surfaces to the office areas. The 60 cm-deep façade elements also provide effective solar screening against the intensive solar irradiation prevalent in southern China. 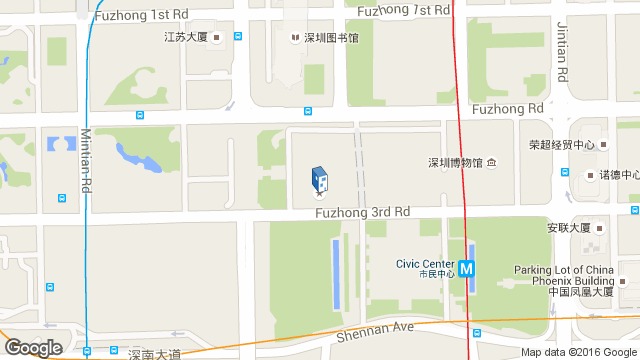