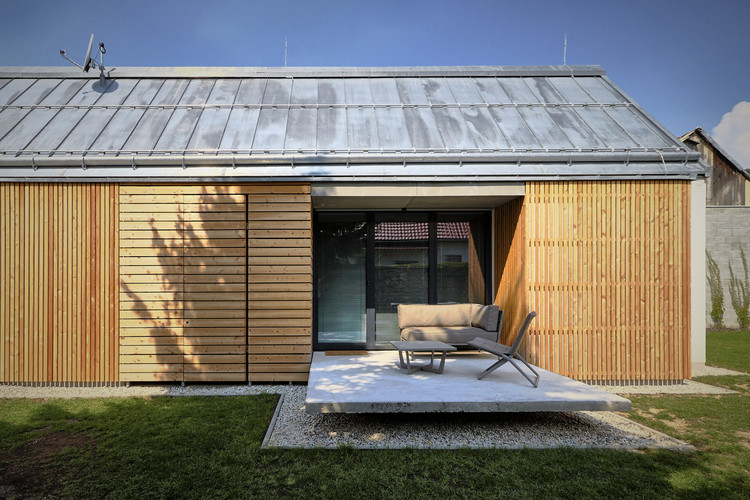 Text description provided by the architects. The house is built in Lučatín, a small village in central part of Slovakia. This fragile environment has clearly set the limits and inputs – volume of building, scale, urbanism of village, wood as a material – both structural and visual.

There has been an older brick house standing on the site of the new house. Its condition was poor, therefor it has been replaced by new construction. The volume of new house reproduces the original one.

Demolition of an old wooden barn in the rear of the property was not an easy decision, although it opened up a whole new view into the natural surrounding without disturbing the rhythm of street. Existing adjacent stone wall and coniferous trees were taken as fixed landmarks to communicate with.

House layout is a variation on the local traditional building – tree main spaces (- front room as a living area, kitchen in the middle, the back room - bedroom), connected by site corridor (called gang). This corridor, extending trough the whole house is formed into functional spaces (entrance, storage spaces). Alltechnical equipment is concentrated in central core to minimize plumbing.

Due to the character of the site,  environmental impact got into consideration. In addition to the structure of wood it was also planned to reuse materials from old building and barns. This has been achieved only in part - an old house was dismantled and the material distributed to other constructions in the area, but wood of barn was not healthy and could not be used as cladding material as intended. Still, all supplier firms were taken from the surrounding area.

Construction of the house is wooden - in this case, the Swiss system called STEKO, developed in collaboration with ETH Zurich. These are bricks made of solid spruce wood, which can be filled with different insulation. The wooden part of the building including the roof has been built in five days, which is a big advantage of this kind of construction.