Now in its second year, Toronto’s annual Winter Stations design competition has revealed its four winning designs, and three student designs that will add art to Toronto’s beaches. Receiving almost 400 submissions from local and international designers, this year’s theme “Freeze/Thaw” challenged participants to respond to the changing climate of winter. Founded by RAW Design, Ferris + Associates, and Curio, the Winter Stations Design Competition uses design to inspire Torontonians back outside.

“The public participation in Winter's Station's inaugural year proves that even the most overlooked winterscapes can be injected with vibrancy and life," says Ted Merrick, lead designer at landscape architecture firm Ferris + Associates. "Our ultimate goal for year two remains the same - to encourage the community out of hibernation and back to the beach."

The winning designs will be built along different beaches in Toronto, adding to existing lifeguard towers. See the winners after the break.

"Based on a strong duality of perceptions, the structure appears as an elementary floating cube made of hung ropes, offering a porous and playful matrice into which visitors may take shelter. The lifeguard chair stands at the core of this multilayered rope forest, beneath the vault of an inner clearing. Open by a skylight oculus, this introverted dome space creates a contrasting insulation feeling, and invites visitors to climb the chair to observe the surrounding winter landscape from a different perspective."

"Informed by aggregation processes exhibited by natural granular material such as snow, the system is capable of crystallizing into a meta-stable, solid state; yet the material is able to be easily reconfigured, like a liquid, due to the system’s loose bonds. While snow melts away eventually leaving little trace behind, Flow serves as a reminder of the snow structures that once speckled the landscape. The dynamic process of freezing and thawing, like water transforming from solid to liquid, is expressed in an equally charged form capturing the flow of energy."

In the Belly of a Bear | Caitlind r.c Brown, Wayne Garrett and Lane Shordee. Calgary, Canada

"Juxtaposing a dark, charred aesthetic against the bright, stark landscape, In the Belly of a Bear invites the public to climb up a wooden ladder into a domed interior lined densely in thick, warm fur. Within this cozy, warm space, visitors can find reprieve from the cold outside or gaze out the large round window pointing towards the lake. A truly collaborative effort, In the Belly of a Bear was envisioned by a team of three Calgary-based artists, each bringing a distinct discipline to the project."

"First they freeze in the snowy icy landscape, then they thaw in the hot SAUNA. The freeze thaw process that we have in mind is one for people. Members of the community can take part in this exhilarating process or observe in awe. The sauna is a simple timber construction with tiered seating for three, the higher the hotter. The twin wall insulating polycarbonate outer skin of the sauna will give chilly winter walkers a steamy glimpse of the thawing bathers within. At night solar powered lights illuminate the scene - a hot steaming beacon on the beach."

"Made from sewn fabric, LED lights and a welded aluminium frame, Aurora is a kinetic sculpture that hovers above the lifeguard station like a spinning chandelier. As the visitor approaches and touches the illuminated tubes, they respond to body heat by changing colour."

"Composed of wood panels, OCADU’s design resembles that of an upside down canoe, creating an interior dome for the public to take shelter. Evacuated solar tubes placed at the rear of the structure are designed to turn snow to steam, creating a halo of fog emerging from within this ‘steam canoe’."

"Inspired by the natural formations formed by frost in the outer layer of earth, or Lithosphere, Lithoform aims to create a reprieve from the harsh winter winds. The structure's cleverly designed fissures create a polychromatic cavern of filtered light around the lifeguard station."

View all of the entries here. 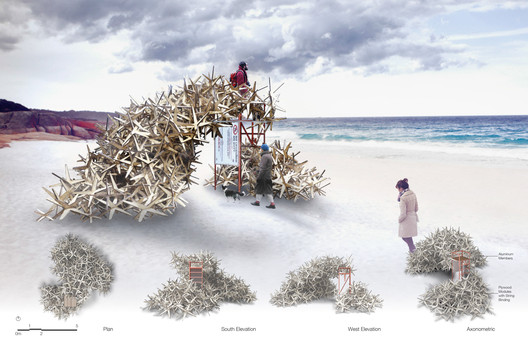