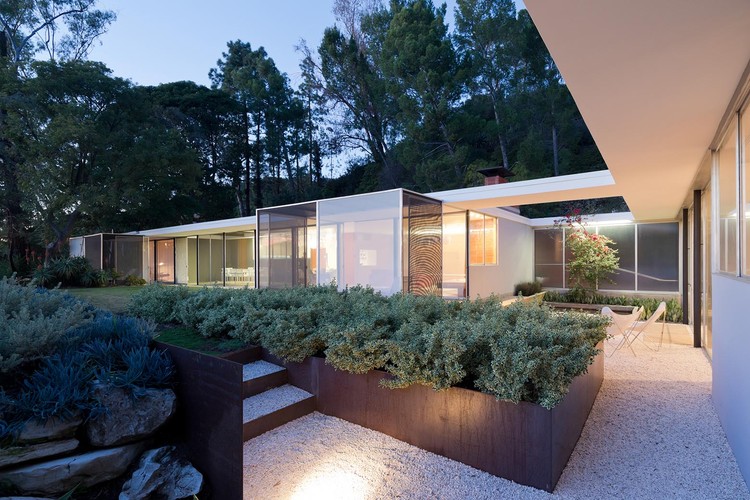 Text description provided by the architects. LOHA’s restoration and modernization applies contemporary measures of performance and design to a historic building, enhancing its continued life as an exceptional family residence.

The Julius Shulman Home and Studio was originally commissioned by photographer Julius Shulman, designed by Raphael Soriano, and completed in 1950. It is one of twelve remaining built Soriano projects, the only with an unaltered steel frame, and a City of Los Angeles Historic–Cultural Monument. LOHA was engaged to not simply restore the significant home, but to update the space so that it could meet the specific needs of a young family.

For this project, LOHA undertook extensive research into the materiality and design intentions of the original structure, as well as other buildings from the period. As a notable landmark, the Shulman Home was restored under strict preservation guidelines supervised by the Los Angeles Office of Historical Resources. Due to the home’s status as a residence and not a museum, LOHA was granted more flexibility in upgrading the residence with essential contemporary features and important amenities. LOHA’s sensitive and light approach brought out the timeless nature of the Soriano’s elegant design.

LOHA matched the original materials when possible and reestablished the fundamental perimeter and profile of the structure. Key experiential moments of the home, such as an all-cork entry sequence, were also preserved. This historical respect, in concert with an approach that engaged the property as a dynamic environment and not a precious artifact, drove LOHA’s enhancement of the more functional spaces and created opportunities for new designed interventions.

In keeping with the indoor-outdoor California lifestyle, popularly promoted in Julius Shulman’s photographs, the original system of sequenced glass panes was restored and then paired with a parallel system of adjustable screening veils. The transitional spaces created through these screened-in patios were a key aspect of the Shulman family’s enjoyment of the home, and a pivotal element of the architectural legacy, which the new owners continue to honor.

Inspired by the predominance of existing built-in storage and furniture, LOHA introduced custom cabinetry and woodwork, including an integrated shelving system and cantilevered bench. By reinterpreting this Modernist feature, LOHA was able to subtly insert smaller, energy-efficient HVAC systems into the cabinetry, creating sustainable climate zones that eliminated the need for a centralized cooling system that would have interrupted the home’s flat roof line.

The kitchen and bathrooms were fully redesigned, and all plumbing and water heating systems were updated to exceed current standards. A concrete floor was poured and a new skylight naturally illuminates a formerly under-lit hallway. LOHA also reconfigured the home’s plan to accommodate a guest bedroom

The Shulman Home and Studio is the latest in an established body of LOHA work hybridizing old and new for the purposes of adaptation and reinvention. Previous to this project, LOHA renovated two Richard Neutra homes in California and an 1847 coach house in Dublin, the Flynn Mews House, bridging an unabashedly contemporary addition with the historic façade in a uniquely intimate urban site.