Save
In Praise of the Glitch: WAA's Yinchuan Contemporary Art Museum
Share
Or
Copy

In November, the Architectural Review concluded its search for this year's most promising young designers, awarding a total of 15 projects in its annual Emerging Architecture Awards. Selected by a jury comprising David Adjaye, Peter Cook and Odile Decq alongside AR Editor Christine Murray, these 15 projects included just one firm from China: WAA (We Architect Anonymous), whose Yinchuan Museum of Contemporary Art (MOCA) was commended by the judges. In this article, former associate member of Archigram Colin Fournier reviews the awarded building, showing an appreciation of WAA's work equal to - or perhaps even greater than - the award's jury.

This contemporary art museum is not what it seems. It appears, at first, to be a fairly familiar manifestation of the contemporary architectural discourse, and indeed the striking fluidity of its lines and its impressive mastery of parametrically-enabled tectonics as well as GRC technology put it on a par with recent buildings by Zaha Hadid or MAD, but this first impression is somewhat deceptive: the building is, in fact, refreshingly unique and a radical point of departure from the dominant design ideology of our times, a significant rupture from the orthodoxy. And a very promising one. 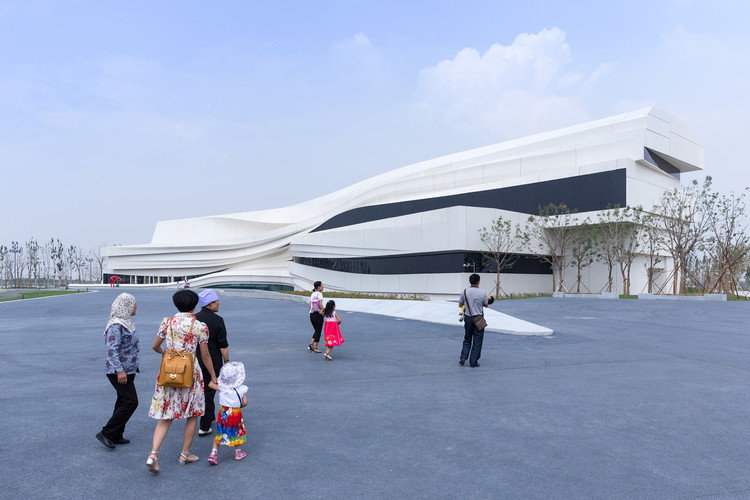 In its bold departure from the status quo, it is reminiscent of two of Edgar Allen Poe’s extraordinary tales: “the devil in the belfry” and “the angel of the bizarre”; it is the symptom of a very important moment of change, the moment when something really strange unexpectedly begins to occur in the cultural landscape, a point of inflection, a sudden cut, a disturbing break in the flow, a glitch.

To fully understand its significance, one has to situate this museum within the context of recent developments in the theory and practice of architecture, in our age of globalization. One has to acknowledge that what has actually been happening all over the world, including China, has been a quasi universal process of homogenization, an unprecedented impoverishment of the diversity and complexity of architecture, to the point that even its rare exceptions also fall into the same mold and follow a predictable norm.

Modernism, even at the peak of its power, had never been able to achieve such a level of hegemony, repetition, standardization, of reproduction of the same design tropes, taken to the level of perfect cloning. At least its renegades, the few rebel architects who resisted its diktats, were true “enfants terribles”: Postmodernism, although it did not last long, occasionally generated, for the brief period of time before it sabotaged itself by falling into pastiche, some promising signs of deviance. Why is it that now, in late modernism, there are hardly any more glitches in the system?

One of the possible explanations of why our global system of urbanism and architectural production, which includes not only its material modes of production but also its conceptual tools and its intellectual practices of critical discourse, has reached such a “perfect” level of uniformity, is indeed that it has now managed to incorporate its own dissent.

As Paul Virilio would say, its modus operandi consists, like military warfare, of two interconnected parts: the strategic and the tactical. At the strategic level, it consists of the mass production of the built environment, the proliferation of generic residential blocks and commercial developments that are standardizing the urbanized world at an exponential rate; at the tactical level, it consists of the sporadic creation, here and there, of token singularities commonly nurtured as bespoke items of branded “starchitecture.” What is important to understand is that, at a fundamental cultural level, there is no significant difference between the two: the standard and the bespoke need each other and they have effectively become indistinguishable from one another.

From a political and ideological perspective, this similarity is not so hard to analyze and decode. Aesthetically, however, it is harder to identify: anyone can perceive the self-similarity of commercial architectural typologies, but it is harder to become aware of the extent to which even the outstanding acts of design heroism are themselves clones, artificially transplanted onto their sites out of nowhere, detached from both space and time.

It is only the rare “glitches,” like the Yinchuan museum, that can make us understand, by contrast, the nature of the orthodoxy, the codes of normal practice and their underlying motivations: their key characteristic is the persistent but partly unconscious attempt to sublimate materiality and hallucinate the perfect pure form, to pursue the illusion of a seamless world, spotless, ageless, homogeneous, universal, consistent and predictable, with no signs of any doubt, no dialectics, no history, no complexity nor contradiction. Surprisingly, symmetry, which logically should have been an important part of this normalised repertoire of design virtues, is no longer considered to be de rigueur, having fortunately been unable to survive the repeated attacks of deconstructivism. But otherwise, the dominant aesthetic of our contemporary period of late modernism is one that does not tolerate any notable autonomy and differentiation of the parts within the whole.

It appears to be quite paradoxical and somewhat counterintuitive that this phenomenon of ubiquitous homogeneity has been achieved precisely at the time when powerful digital capabilities and sophisticated software systems, such as Rhino and Grasshopper, have finally become available to designers. Such tools, together with the artificial intelligence programs that inform them, have no cultural preconceptions. Unlike human beings, they cannot cultivate any inbuilt stylistic preferences. Theirs is a probabilistic universe of infinite variations, of limitless possibilities, blind as well as blissfully free from any a priori meaning, at least not one dictated by philosophical determinism. How come, therefore, that the evolution of these tools into the definitive dogmas of parametric design has reinstated all the bad habits of the ancien regime?

It could be that this is the perverse effect of a new medium. It happened to literature before it happened to architecture. It was Marshall McLuhan who first understood that “the medium is the message”: it could indeed also be that, in the same way that the Gutemberg press, by wrapping all the diversity of human expression within the flowing uniformity and universality of the cuneiform script, easy to print, the tools of parametricism are now wrapping the complex variety of design expressions within one language that inevitably imposes its mold. If this usurpation of the message by the medium can happen to literature, even though the literary medium is primarily intended to convey the message rather than to point out the merits of its own form, the power of the medium is even more likely to affect architecture, obsessed as it is with its own formal qualities as a medium and never more than marginally interested in the content of its message.

In the light of these observations, the Yinchuan museum stands out, despite its first appearance as a continuously flowing abstract geometrical form, as a highly idiosyncratic celebration of the specific characteristics of its site and of its particular geological history. Although developed, without doubt, by means of parametrics, the project clearly did not originate from the intrinsic mathematical logic of parametric algorithms, but from a design sensitivity attentive to the immemorial narrative of the slow, cumulative processes of sedimentation and erosion that created the natural environment along the Yellow River.

A closer look at the design reveals that, rather than conforming to the orthodoxy of the seamless and of the timeless, the form is made up of distinct individual segments; unexpectedly, considering the geometric sophistication of the double curved GRC façade panels, the architects were not afraid to express the joints, which are not grouted and are allowed to read as fissures; they also refrained from painting or rendering in any way the concrete outer surface of the panels, which means that they will deliberately be allowed to age and show the passage of time.

Even more surprisingly, the building is heterogeneous, clearly made of different constituent parts. In particular, there is a strong tension and differentiation between the Eastern side (the one facing the city) and the Western side (facing the protected wetland), a big contrast between the horizontal sedimentation layers of the latter and the blocky mass of the cyclopean façade in the former, with its large vertical crack forming a cave entrance.

Internally, the design plays on a theatrical contrast between the clarity and simplicity of the central, top-lit atrium space linking its two main entrances, and the variety of its gallery spaces and other programmatic elements. Here again, as can be seen from the plans and particularly the two key sections, the design language is one of differentiations, stressing heterogeneity and layering as opposed to smooth isomorphic continuity, with transitions from dark to light as one goes up inside the building, as well as from rough to smooth materials, heightening the difference between the experience of rising and that of falling.

It is a pleasure to see the delight that the architects have found in endowing their building with so many different layers of sensations and meaning. They like to think of their building as a “fossil,” something that belongs to the geological history of the site and also, perhaps, to the ancient civilizations that may have lived there a long time ago. This sincere commitment to the importance of time, together with the other unfashionable design motivations that have given the museum its form, in particular the emphasis on differentiation rather than sameness, on disruption rather than continuity, on craftsmanship rather than on repetitive industrial production, on the sudden glitch rather than the continuous signal, that make this building a unique intellectual and artistic proposition.

It is, as stated above, a very significant point of departure from the norm, playfully initiated by this young and very talented architectural firm. Let’s see where it will lead them next!