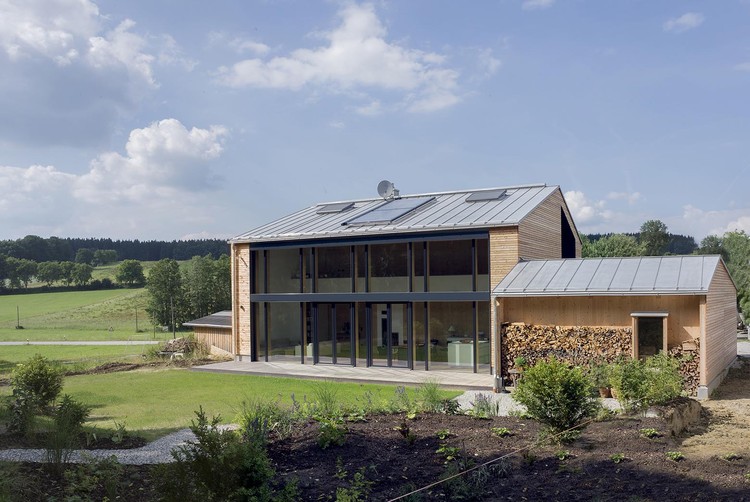 Text description provided by the architects. The house is located in a hilly moraine landscape east of Munich on the edge of a village. South and west, the view opens to the landscape through scattered farms, the village is situated north-east of the property. We decided to create a semi-public access area, which is bordered by the house and carport. The garden area is on the one hand hidden from the street, on the other hand it opens at the same time towards the countryside to the south and west. The house responds in the same way on this situation by orientating the 60m² large façade opening to the south-west. You enter the house through a niche in the façade, from which already falls the view through the house into the garden and the private sector.

The layout on the ground floor develops around a central block in which a barrier-free bathroom and building equipment are housed. Along the north facade runs a deep closet to provide storage space in this house without basement. Two thirds of the groundfloor area is occupied by an open kitchen, dining and living area, which connects spatially over the large glass surfaces with the exterior space. This part of the house is entirely a two-story space. Via the stairs you reach an elongated gallery upstairs. Here is a working space situated which also provides the view over the fields and is supplied via skylights with daylight. In the back of the gallery there are two bedrooms with a bathroom as most private zones in the house.

The load-bearing walls and ceiling panels were created exclusively in solid wood construction. The façade-construction on the south side also bears the roof, it was possible to do without additional supports in front of the facade. Also under the gallery could be dispensed with pillar, by the gallery railing was constructed as a supporting glulam beam holding the ceiling panel above the main floor about forty feet along the long side of the house.

The material wood was used for the construction, but also for environmentally sustainable reasons, as insulation in facade, roof and floor plate. The facade cladding in untreated larch has followed this concept. The parapets of the loggias on the first floor are integrated inconspicuously in the passing cladding.

Due to the high insulation effect of the wooden structure in combination with the wood wool insulation boards along with a triple glazing a KFW 40 standard has been achieved. The building is heated via a firewood pellet hybrid furnace which supplies both the domestic hot water preparation, as well as the underfloor heating via a buffer. Rounding out the overall ecological concept with a central ventilation system with heat recovery and geothermal heat exchanger as well as a solar collectors on the roof for heating support.

About 90 tons of CO2 have been withdrawn in the long run of the atmosphere and stored in the house in the approximately 90m³ built construction timber alone. The material wood produced in its production no emissions, energy consumption for the processing of the building material is reduced to the transport, as opposed to the energy-intensive production of cement or bricks.

The surfaces in the house arise largely from the still visible wooden shell, which produces a warm and very human comfortable living climate. Only selected walls and ceilings were lined with plasterboard, to cover the electrical installations. The floors throughout the house are made of oak parquet industry slats. The roofing is designed as a stainless steel standing seam roofing. Another design theme is accessibility for elderly and therefore also sustainability in use of the house at the age. The ground floor is therefore designed as an independently functioning, barrier-free apartment with a bedroom and a wheelchair-accessible bathroom. 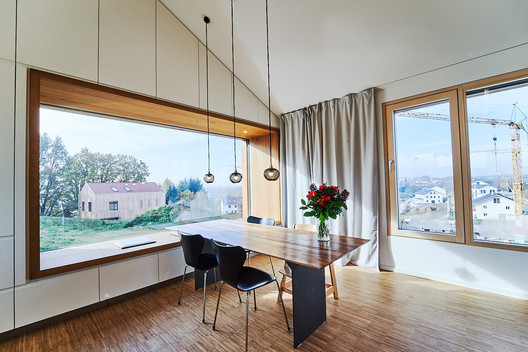