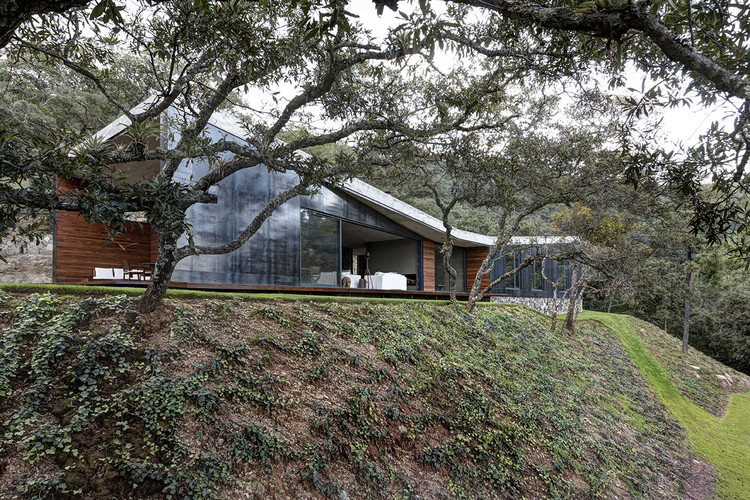 Text description provided by the architects. The project for GG House emerged from a very particular commission. Our client, a middle-aged bachelor, wanted to build a weekend house in a clearing in a forest, on a property on a mountain. In addition to the topographical conditions, we found that the project involved unusual requirements in terms of privacy, which allowed a more open relationship between the spaces and the environment.

The house is located on a steep terrain overlooking a plain between mountains and the Colima volcano in the distance, visible above the tops of the oaks. The rugged topography was a determining factor in the layout of the project; it was designed on a series of terraces carved into the hill and linked by a zigzag path.

The property is accessed from the highest point. The vehicles travel along a path that cuts the slope downhill towards a garage that sits on an intermediate terrace and sinks into the hill, framed by a stone portal. The roof of the house, the first facade that confronts the visitor, is seen between trees as an exposed concrete slab covered with gravel, and reveals the broken profile of the building.

From the garage arises a staircase made of rectangular stone slabs of variable dimensions, from a carpet of gravel that refers to the roof and seems to suggest that the building is an extrusion of the land itself. At that moment, the front facade of the house is revealed, lined with a lacquered steel plate which will age at whim, like the rest of the materials. Over time, the plate will lose its luster and will oxidize, changing in the same way its surroundings do, and will leave a trail of oxide on the stone that will eventually be confused with red earth, very characteristic of the region.

The program of the house was designed in a rectangular plan that is inserted into one of the slits in the ground. The resulting volume is a prism sitting with respect on the ground, oriented transversely to the slope of the hill and exposing its longest side towards the view. We decided to make an inflection at about the center of the volume, in the entrance space, to create a break in the roof, to break with the elongated proportions of the building. In plan, the gesture of the break is repeated on the north side to allow a more ample terrace overlooking the Colima volcano.

The entrance lobby traverses the building and breaks it into two equal blocks. At the end of the west block there is a terrace clad in cumarú, suspended above the ground, and connected to the master bedroom through a window. The rest of the program includes two guest bedrooms, each one with its own bathroom, a guest bathroom and laundry area. The block east of the entrance houses the living room, dining room and kitchen; all in one large space that is connected via retractable window panels, a roof terrace that reflects the exterior at the other end and appears to float above the ground. 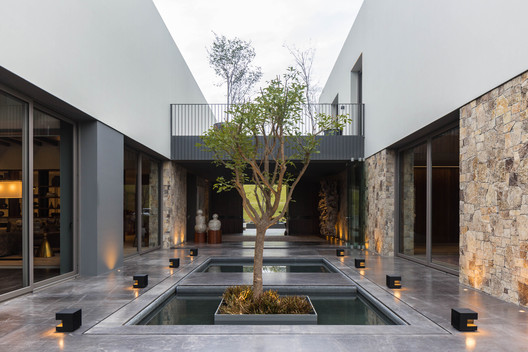 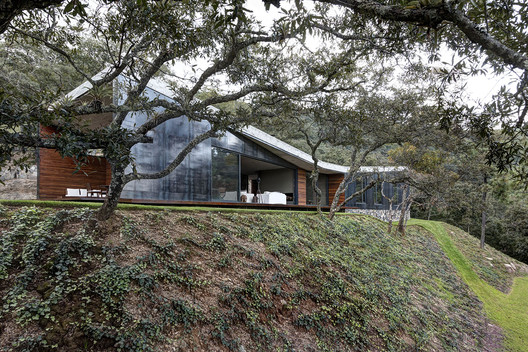