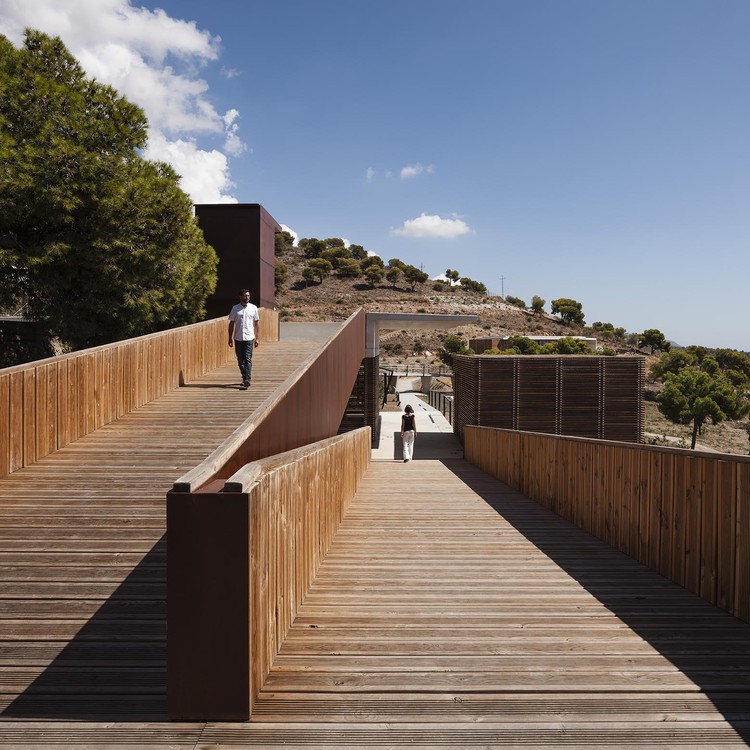 Placed in the “Sierras de Tejeda, Almijara y Alhama” Nature Reserve, close to Nerja Cave, and open out to the shiny surge of the sea, this work supports the connection between the hillside and the paths. The infrastructure program spreads over this landscape, like pieces of furniture. The footsteps will be guided along unpaved paths, sometimes at field level, sometimes higher to cross over a little valley or just to be accessible. These paths will also generate covered places, which will become useable because of their connection to pieces of constructions. These pieces are exactly the necessary size and create a group, over the same enviorement that must be shown with this work.

The access takes place across a viewing‐point that brings us to the Garden, placed in a lower plane. We go down to this garden along an evolving path which become into a roof where we the Reception and Herbal buildings are placed. The Reception building also contains the information desk, the administration office and the shop. After this first filter we can continue to go down across the Nature, a sort of open‐air classroom till our next stop, where the rockery and the pond are. If we then go up, we’ll find the classroom‐workshop and the laboratory, both close to the plants nursery and the orchard.

Some modules, organized as places of different uses stand over the Garden, connected with the walker and sometimes creating a sort of observing points where one can look without being seen. The same uniform appearance will be able to contain places, like classrooms or storage rooms. We can sometimes walk over them because they are really unpaved paths. Or sometimes they can be used as vegetation display structures, like the case of the ecological tank roof that create a continuation of the hillside. We keep this way the rain water till we use it, supporting the biological cycle of this portion of Nature.

The colour of the hills become part of the construction by paths and walls. The structure of exposed concrete, evolving roofs, floors and walls reinforces the idea of a cave. Different types of wood (grains over the concrete or the natural wood lattice) create a connection between functional elements and urban pieces of furniture. The rusty iron gives the appearance of lightweight in protection elements and supports. The time will be present as a texture that will unify the natural and the manufactured things.

The architecture is spread over the terrain to supply the needs of the display. We find, with their different sizes, toilets, a classroom, an information point, bins, benches, etc. They sew the different parts of the land, like big steel brackets. In this way, the architecture becomes a structure for climbing plants. The air and the perspective go through these elements.

The paths, according to the level lines of the land to be used by handicapped people, will display different layer with different kinds of plants, so that the Garden will be green covered. These unpaved paths will be also in lower or higher levels, according to the needs of the program. The elevation is useful for a stage area, a shady place for people to join and observe. The buildings rise over the landscape, being folded to create covered viewpoints

The Botanical Garden is based on the principle of making the place natural. So it stands according to simple schemes of distribution and vegetation cultivation. Although it’s just a part of Nature, it also becomes a representation of the native plant species of the province. The garden must dialogue with the environment and develop the continuity with the landscape. A guide, a gardener and a biologist will be the staff.

The path that goes down to the garden avoids the back part of the restaurant, facing directly the sea, along the hillside. The “naturalization” of the place will be a slow process, linked to the evolution of the plants we must preserve. Unpaved paths and wire mesh for climbing plants create a sort of plant tissue that becomes another topographic level. It will be changing along with the seasons.

Pines will be systematically felled when necessary during the first phase. Afterwards, they will be replaced with native trees in order to create a botanical continuity among the different levels.

The reinforced simply twist wire mesh with steel struts give the Garden an appearance related to the Nature Reserve where it is placed and which it must preserve. The brackets that connect the different interventions will be replaced by wooden posts, to make a transition The masonry, so present in the area and close to the Nerja Cave, is used for little retaining walls and “parterres” for trees.

At the secondary entrance of the garden there are some plots as an educational orchard, so that the classroom could be used separately for meetings, conferences and other events. The stage area is very near, in the shady place of the footbridge.

Another resting point is close to the pond, in the natural valley. A place to stop and enjoy the leafy vegetation and the sounds of frogs and other amphibians, as it’s normal close to ponds.

A more natural path, just sculpted and cleaned, adapted to the hill, drives us to the higher viewpoint, to enjoy the views of the Nerja and Maro coastline. This “mirador” is inclined to prevent from seeing the motorway and make the eyes look directly the horizon. 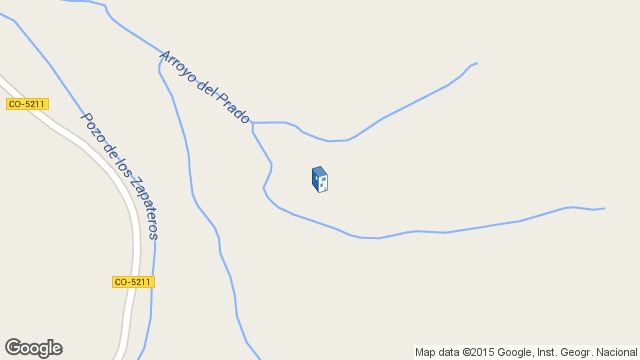