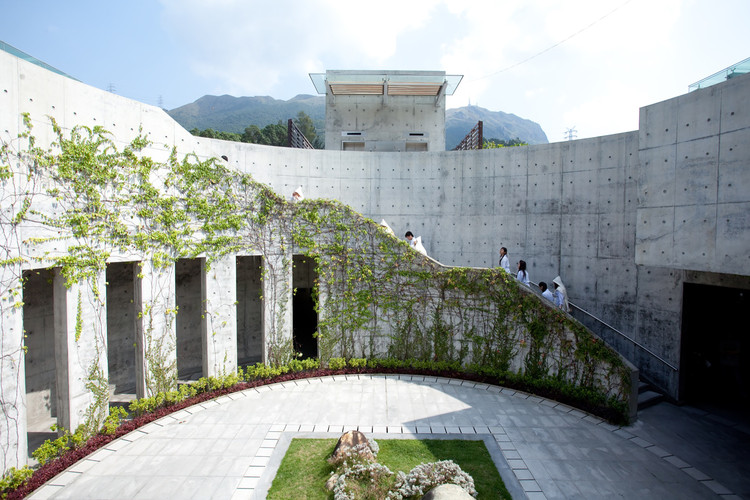 Text description provided by the architects. The new Diamond Hill Crematorium is intended to be a prototype. As set out in the prologue, the new Crematorium particularly addresses the emotional needs and feelings of the users, designed as a demonstration project for future crematorium development.

At times of mourning, a comforting surrounding can do much to ease the pain of the bereaved. In the new Crematorium, the landscaped podium provides an opportunity for the mourners to go through the ritual in a soothing environment that is in tune with nature.

Other than a comforting environment, the philosophy of “Death is not the end” and “Life after Death”, as set out in the prologue, is echoed in the following design:

At the entrance, the portals depicting the I Ching symbols of既濟 (meaning complete and finished, refers to death) and未濟,(meaning incomplete, not finished), imply the never ending evolution of Life and Death.

The boulders in the square planter of the atrium, having been excavated from the site during construction, were given new life here as a sculptural centre piece; the water being recycled in the lily ponds is conveying the same message of the circle of life.

It is the purpose of the Ceremonial Path that after having experienced the sequence of spaces and vistas, the mourners would have found peace of mind.

“Round is the Heaven and Square is the Earth” --- a Chinese way of looking at the Universe.

Mourners, having stepped down from the coach at the sheltered drop-off point at ground level, will be greeted by a sunlit circular atrium with the afore-mentioned square planter in the centre showcasing the boulders, which imbues a feeling of serenity. On looking up, they will see the sky which is shaped by the circular form of the atrium, signifying the all-embracing roundness of Heaven.  They then ascend the circular stairs to the podium as if transiting from Earth to Heaven with their beloved.

As they reach the top, the space immediately opens up to reveal a whole new broad vista of luscious green hills beyond. Up close, they will find themselves surrounded by a garden of plants and lily ponds, with their gentle and soothing murmurs of running waters.

Each of the Service Halls has a seating capacity of around 100 people. The soft natural rays from the skylight and windows bring a dignified and comforting atmosphere to the congregation.  The ceremony is completed on exit to the garden with sweet-smelling and colourful flowers and shrubs at the back of each Hall.

This is a simple straight forward modernist building true to its functions, with no unnecessary embellishment or decorations. The four Service Halls and the central circular atrium are arranged in a symmetrical pattern, which helps to establish a sense of stability and a calming ambience, important for mourners at such times. The architectural elements in this building, such as fair-faced concrete, timber, glass, natural stone, plants and water, help to create an environment harmonious with nature.

Various planting areas and slopes with a wide range of plants that includes trees, water plants and climbers are carefully blended into the building. Continuous planters along building edges further soften the rectilinear building form and minimize visual impact of the building mass. The roofs of the four Service Halls are covered with special species of grass that requires minimal care. The stone-clad walls of the cremator plant room, the fair-faced concrete walls of the Service Halls, and the fair-faced concrete pylon that houses the chimney stacks, are also covered with climbing plants, like beautiful green tapestries. 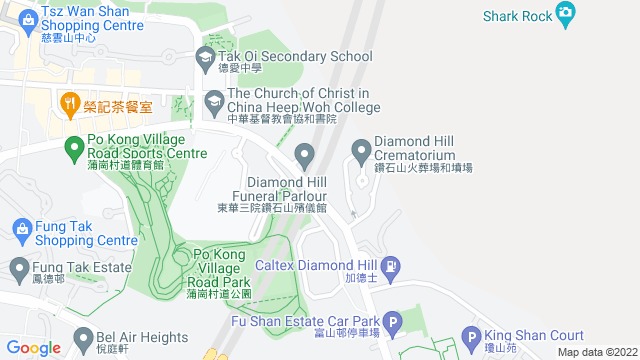 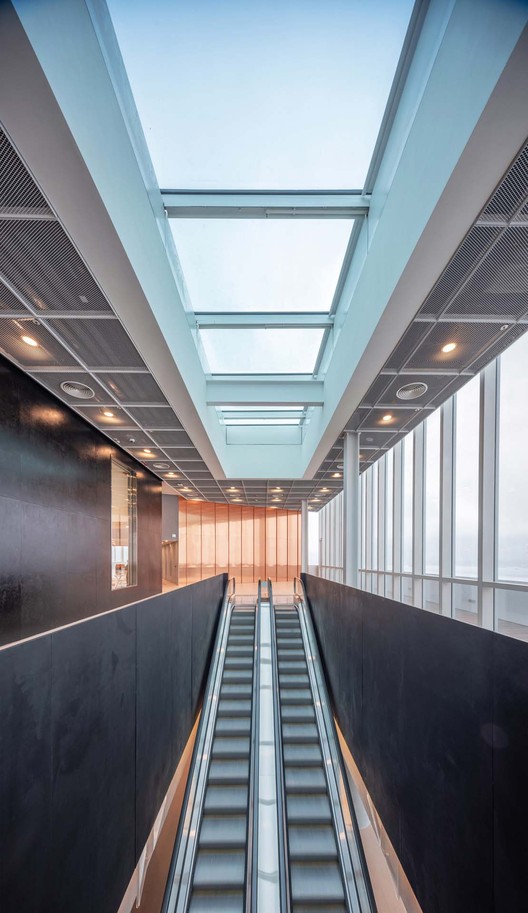 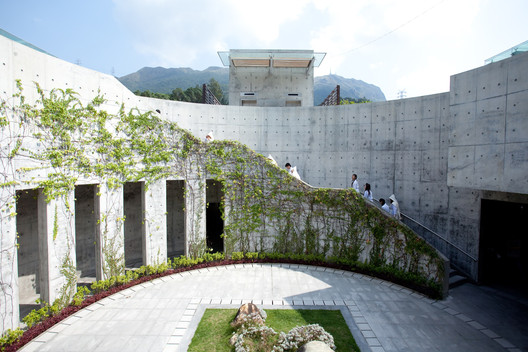