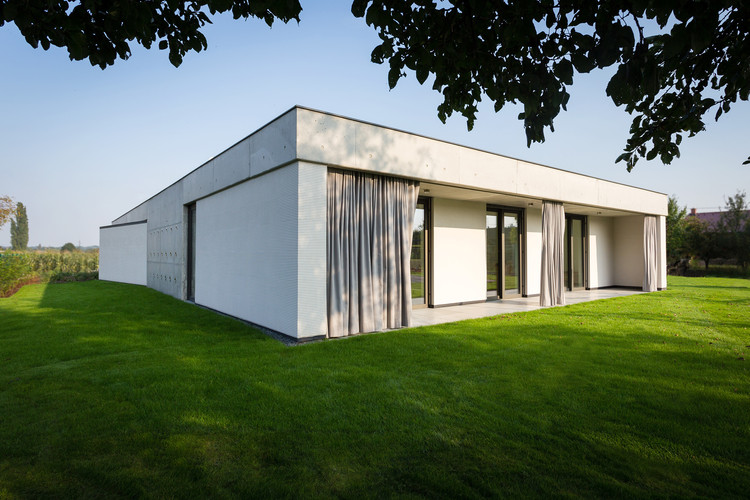 Text description provided by the architects. Flat land to build a house is located in Olomouc-Slavonín. Access to the site is from the east side, where it is also connected by new driveway. The surrounding lands were until recently used as private gardens. Due to construction of a new access road (including utilities) in place of the existing dirt road, housing development in the area started.

House proposal is designed to create maximum privacy for its inhabitants from their surroundings. This is achieved by peculiar ground plan of the house. Ground floor volume consists of three wings and an inner atrium. Composition of the wings creates a U-shaped plan facing the south side of the plot.

The main entrance is situated in the east wing of the building where it is connected to the access road. It is located centrally in the east façade and is plastically reinforced by embedding into building substance in the form of covered porch. In this wing there is mainly service area for the house. The workroom (occasionally used as a guest room) with a corner window toward the street, dressing room, shower with toilet, and utility room with laundry are accessible directly from the entrance hall which is brightened by the central skylight. There are also garage and a mechanical room.

Subsequent northern wing of the house is the main living area and it opens up southward into the private atrium, which increases the internal living space by optical linking to an outdoor space provided with a large-format windows. As a part of the living space there is the dining room with the kitchen, which is embedded in a niche with a skylight. The kitchen can be closed from the living area with sliding door. Dining table is separated from the kitchen by a mobile counter, which also serves as an occasional seating.

At the end of the main living space there is common living area situated. The north wall of the living area extends diagonally from the floor plan of the main mass of the house and is ended by a window which views towards the access road. In this space there is a seating area designed – a bench with a triangular shape in plan. Also the bedroom is oriented to the atrium. It is hidden with the facilities in separate volume close to the living area.

West wing of the house is designed as a private area with children's rooms which are freely connected to the main living space by a corridor. Rooms are window oriented to the western part of the garden. Between the rooms and the garden a covered terrace is designed embedded in the house volume creating a natural shield. On the south side there is a bathroom for the children.

Design of the house consists in a simple compact mass proposal with sober composition of the window openings except porch embedded into the building volume and a "peephole" extruded at an angle from the living room. Simple substance of the house is closed by the parapet along the roof edge made of an exposed concrete. On small segment of the north facade it converts smoothly into the reinforced concrete wall. There are glass fittings of a circular section hemmed by rings of stainless steel arranged in a regular pattern which creates points of light inside the house and the atrium.

Surfaces of the other walls are plastered with bright colors. The scale of plastered surfaces is softened by plastic ripples which create a play of shadows. Shade for the children's terrace is provided with a curtains, creating also semi-private outdoor space. Surface of the terraces is made of a large-format exposed concrete floor tiling. Floor coverings are mostly made of polyurethane with a soft filling of bright tones. Bathrooms have large format ceramic floor and wall tiles. The inner walls are mostly plastered with bright colors, the walls in the "peephole" are from Venetian plaster.

The lobby walls are covered with wood boards with natural oak veneer which is also used on wooden doors and most of the carpentry except the kitchen which is made of white varnished boards. Doors between the hall and the living area are height to the ceiling and are perforated with smaller round holes related to those in exterior concrete wall. Similar detail is then used on the street fence. Kitchen, bathroom and the entrance hall are lit up by skylights made of translucent polycarbonate. In skylights there are installed LED stripes making the skylights look like interior lights.

The entrance doors are full aluminium including aluminium cladding of the porch walls. The interior doors are wooden with hidden hinges and the frames aligned with the wall surface the same way as indoor floor plinths are. There is underfloor heating in the house, in bathrooms combined with design radiators, the heat is produced by ground source heat pump with deep wells. The house is also equipped with a cooling system, electronic security system and intelligent control system.

During the second phase of the construction, there was a garden pavilion realized on the south side of the property linked to the house by its geometry and height. An open space designed between the pavilion and the house emphasizes the longitudinal axis of the garden that is further developed by the overall concept of the garden. Among few individual trees planted there a distinctive cherry tree in the back of the garden closes the axis in the view from the street.