From the Publisher. Rail lines, bridges, highways, waterways, and off-ramps—larger than life but part of it, infrastructural systems are the enduring forms of urban evolution, multiplying as cities grow and requiring expanding swaths of territory to accommodate more and more monofunctional requirements. What if the very hard line between landscape, architecture, engineering, and urbanism could find a more synthetic convergence?

Public Natures: Evolutionary Infrastructures explores the potential to shape a new public realm. Essays, roundtable discussions, and selected projects by WEISS/MANFREDI identify new terms, conditions, and models that insist architecture must evolve to create more productive connections between landscape, infrastructure, and urban territories. The book is designed in collaboration with Project Projects. With a foreword by Barry Bergdoll and contributions from Kenneth Frampton, Preston Scott Cohen, Felipe Correa, Keller Easterling, Paul Lewis, Hashim Sarkis, and Nader Tehrani, Public Natures is both monograph and projective manifesto and suggests a new paradigm for infrastructure that is distinctly public in nature.

Marion Weiss and Michael A. Manfredi are the founders of the award-winning New York City-based firm WEISS/MANFREDI. Manfredi has been a Visiting Professor at both Cornell University and Harvard University and Weiss is the Graham Chair Professor of Architecture at the University of Pennsylvania. 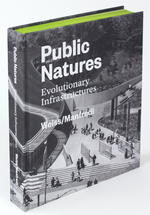