The south of France is known for its endless beaches, nineteenth century architecture, lush greenery, and monuments to its storied history. For nearly a decade, Le Festival des Architectures Vives (Festival of Lively Architecture) has been infusing contemporary architecture into the staid Southern French landscape through the creation of an array of artful temporary pavilions. Beginning in 2006 and 2013 respectively, the towns of Montpellier and La Grande Motte have played host to a series of structures designed to animate historical segments of the two cities. Founded with a mission to celebrate the seminal work of burgeoning architects, the festival aims to produce meaningful and interactive works designed to activate the historic centres of the two ageing cities.

Explore the bizarre and inspired installations of Le Festival des Architectures Vives after the break. 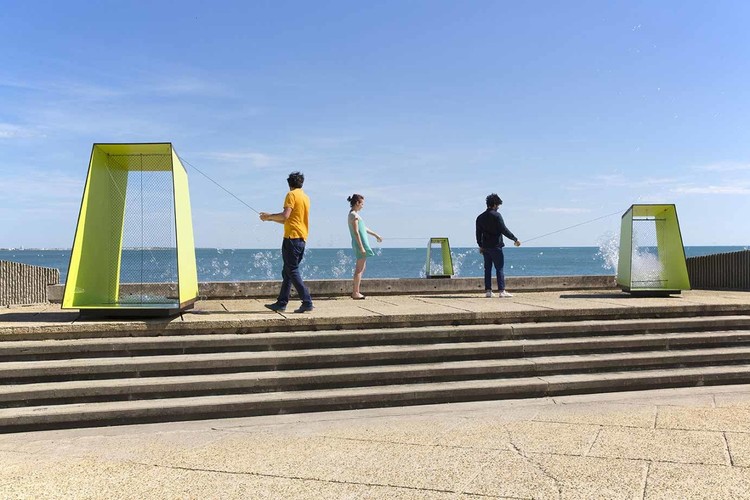 Departing from the previous year's series of unorthodox quasi-shelter spaces, the 2015 projects follow a distinct trend of defining abstract space. Crafted as contributions to a larger discussion on the role of architecture in deeply historical cities, the pavilions located in La Grande Motte defy traditional understandings of the pavilion in favour of a series of independent water-and-air-borne structures. Designers were challenged to use the existing brutalist seaside landscape at La Grand Motte, or create an installation in the historic city centre. The seven resulting pavilions are a daring mix of static, strange, cerebral and

Blurring the line between land art and architecture, Regate (Regatta) by Allegory Studio repurposes one hundred sea buoys, sculpturally replicating the outline of the adjacent man-made pier. Promenade d'Envolees by Archisanat bridges the gap between man and nature, elegantly positioning rudimentary wind socks along the water's edge to create a contemplative and whimsical transition space. La Petite Motte is an untethered and autonomous waterborne traveling island, described by its creators CAME Collective as "a wild island where a tiny Robison Crusoe lives his life of adventurer despite all opposition."

Echoing the silhouette of greenery found in La Grande Motte, Les Arbres dans L'eau serve as a cheeky commentary on urban interventions in lush landscapes, simultaneously providing shade in the largely barren city centre. Harnessing the powerful seaside Mediterranean winds, Embruns inspires a fun reaction to a climactic challenge: bubbles erupt from the pyramidical volumes while waves crash and the wind whistles wildly. Emerging with grace from the seaside landscape, Origamic gently guides visitors through a physical exploration of the unconscious. Exploring the fleeting nature of time, Photo Souvenir frames nature, turning visitors into artists and landscape to a painting constantly in motion. Perhaps the most 'oceanic' of all the pavilions, The Porthole reimagines a common aquatic element as a public space, opening a dialogue on potential social uses for the city's port.

Explore all seven projects, below:

You can see previous coverage and find out more about La Festival des Architectures Vives on ArchDaily, here, and on the festival website, here.