Text description provided by the architects. This combined home, gallery, and workspace is located in a quiet residential neighborhood in Tokyo. The clients, a married couple, came to us with several requests, including rooms where each of them could work undisturbed; a place for exhibiting artwork by the husband, an artist, and for enjoying music and conversation with guests; and a spatial design that took the thermal environment into account.

The building follows the shape of the site and occupies its northern side, leaving an open outdoor area on the south. The first floor contains three boxes whose functions require privacy, such as the study and bedroom. For structural reasons, the two boxes on the second floor are suspended so that they serve as “beams” linking the north and south walls.

Large windows on the north and south sides connect the boxes to the exterior. The window on the south side of the library box opens onto a distinctive view of the road curving dramatically just before it reaches the property, while the box containing the combined living-dining-kitchen area offers a view of a weeping cherry tree in the garden.

By carefully designing the space between these five boxes, we were able to incorporate a sense of scale beyond what is usually possible in an interior residential environment. This area serves as a pathway between boxes, as an exhibition space, and as a lounge for relaxing with guests. Although it is inside the home, it contrasts with the interior of the boxes in that it has the scale of a city street, lending a somewhat public feeling to the space.

At the same time, because this in-between area is surrounded by boxes painted black with calligraphy ink and illuminated by natural light from the entryway and skylights, it feels cozy and enclosed.

To further improve the quality of the interior spaces and provide a comfortable thermal environment, we built eaves over the windows on each of the three south-facing boxes. The eaves, which are designed in response to the function of each box, serve not only to moderate the interior environment but also to strengthen the building’s relationship with its surroundings and stretch the sense of space beyond the site’s boundaries.

Our hope is that the diversity of spaces created by these five boxes and three eaves will both support the varied lifestyle of the clients and function as an interactive space open to the broader community. 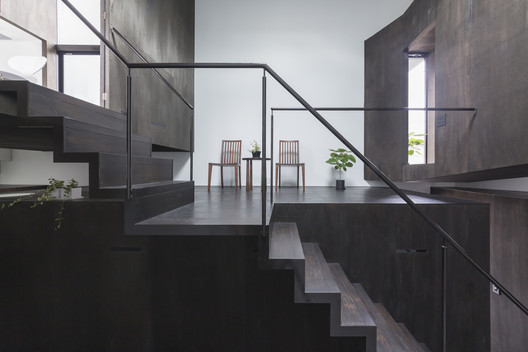