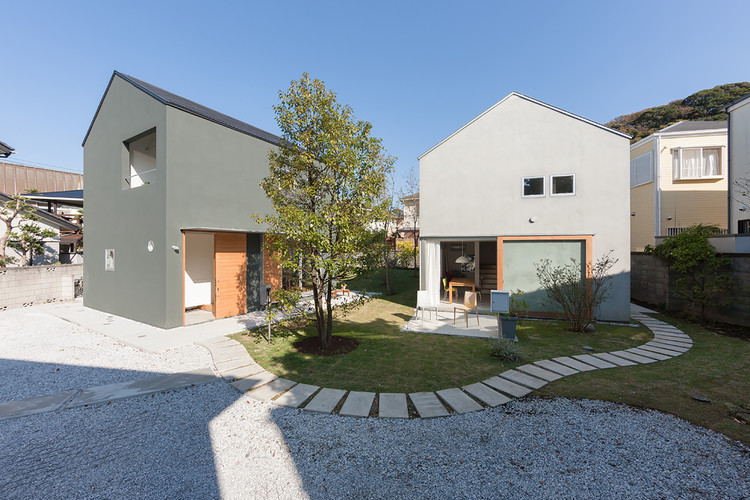 Text description provided by the architects. Two housing is designed from site division. Divides the land, it was decided to design a separate family are two for live house in Kamakura Zaimokuza. Site of about a minute walk from the coast, is a gentle place to smell the sea wind.

There once, have left large trees and old private house, it had the dense. Irregular grounds shape plays a role, such as a fold relative to the surrounding, for the family to begin living in this place, and is likely to give us a rich relationship premonition of the land.

I thought that a site and a placement plan with the size of the building were important to prevent each other's life interference, and to keep the moderate sense of distance with the neighborhood without using the wall when I decided a site boundary line. In addition, the setting and the placement plan of the boundary line repeated a fine adjustment because it was necessary to divide an area equally.

I imagined it what kind of time each family spent at the same time where. And, being conscious of a connection with the outside, I examined the planning of two houses. It is half or less of the allowable value, and the building area is planned, but area of the floor space is not necessarily connected in the richness of the life. In the case of a house of Zaimokuza, this littleness makes life and outside close relations.

The environment that I can share visually consciously can live like a garden even if I cannot occupy each other's land. The two houses have configuration similar, kitchen and dining on the first floor, bedroom and shared space is located on the second floor.

I planned the position and the size of the window so that each life did not interfere it. The difficult operation planned size and placement using a tree only at a window carefully.

Green increases, and the garden becomes like grove of miscellaneous trees when a tree grows and, as a buffer zone of the whole area that included neighboring sites not a garden attached to merely house, prays the place such as the park for it being.

Relations of the adjacent site and building.

In the case of a division divided into a strip of paper form by residential land sale in lots, the life concludes in a site to depend on the connection road. However, I can make the relations between sites next to each other if I can set a boundary line while coordinating plottage by performing a placement plan and the planning of the building.

I thought about which outside and relations you had to finish it at a minimum border wall and noted it on this occasion to operate a window, and not to face you directly. In addition, a planting plan allows the integral plan beyond the site boundary line by increasing a gentle border and continuity.

Of course plan it together; even if untie it, cannot go over the border each because the proprietary rights are independent sites. It is important that I consider future real estate value being aware of buying and selling of the land. By the sale in lots system of the current land building, such a method may not be easily realized.

However, what we designer is concerned with for a division of not only the design but also the land and a stage of the buying and selling is necessary to do life wealthily without being bound by a framework called the possession, and to change uniform cityscape. It is not easy, but wants to be conscious as a person engaged in design of a house.