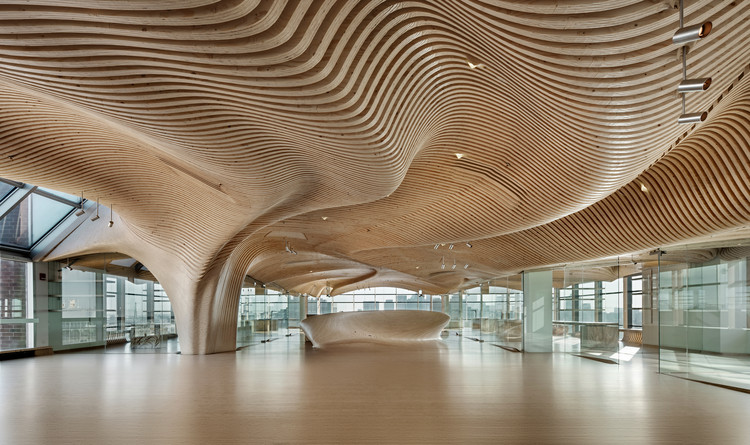 Text description provided by the architects. The project was for the penthouse offices of an investment group in green building and clean energy technologies (CChange). The design drew from our prior sculpture, In the Shadow of Ledoux, 1993, and the Galerie Miran, 2003, proposing the milling of all elements of the interior from sustainably-forested spruce plywood using numeric command machines: information carves renewable carbon-absorbing resource.

The project essentially comprises two planes - the floor and ceiling, both of which are articulated as continuous surfaces inflected by function. The curvilinearity expresses both the digital genesis and the seamless fabrication logic, with the architect providing actual machining files to the fabricator. As far as possible, the ethos was to replace typical industrial components (such as vents, door handles, etc) with articulate milled timber, offering a radically streamlined protocol for delivery of a highly crafted interior.

The intention was to offer a reduced carbon footprint whilst celebrating both a new formal virtuosity and a radical level of detail finesse. Effectively this allows the architect to fully customize all elements of the building, placing material in space with full authorial control (for the first time since industrial components became standard). Other than sprinklers, lights, glass and hinges, the substance of the interior architecture was realized via this unitary material/fabrication logic, with a high degree of prefabrication.

The early sketch design grasped the potential for plastic control of the spatial and detail definition allowable within a fully CAD-CAM environment. The client asked that the work chairs be purchased for liability reasons, but all shelves, desks, benches, storage units, etc were accepted for direct fabrication in plylam via the same method.Ultimately we devised automated algorithms for generating actual milling files, passing from design to fabrication seamlessly and with high tolerances and extremely low percentages of error.

The developed design was nuanced parametrically in celebration of the indifference of the CNC machine to formal complexity. The entire project was nested onto 1200 4ft x 12ft plywood sheets, and milled using a small 3-axis CNC router, which effortlessly carved the ply sections according to our prescribed ‘weeping’ tool paths. Well over a million linear feet of cut were issued, yet the machinic process was essentially error-free and highly accurate. Assembly proved relatively straightforward given the accuracy of the milling, and we enjoyed the elegance of the emerging forms.

The project was nuanced down to the smallest detail, such as the ventilation grille for the computer boxes being inflected to provide a handle to open the door; or the milling of custom mathematical surfaces for each office; even the door handles were carved as customized elements, proving cheaper than stainless steel D- handles! We aimed at formal coherence at macro and micro scales, such that an inflection in the ceiling was echoed in the benches and carried down to the sinuous lines of the door handles.

Functional needs such as ventilation grilles and shrouds for the bright LED lights gave a detail finesse to the ceiling; whilst focal elements such as the conference table or directors’ desks were plastically formed to permit electrical data outlets in the spine, and were embellished mathematically according to parameters of ‘tension’ and ‘irony’. Quite literally, the material substance of each space was nuanced according to the character and mood of each client during the fabrication period! 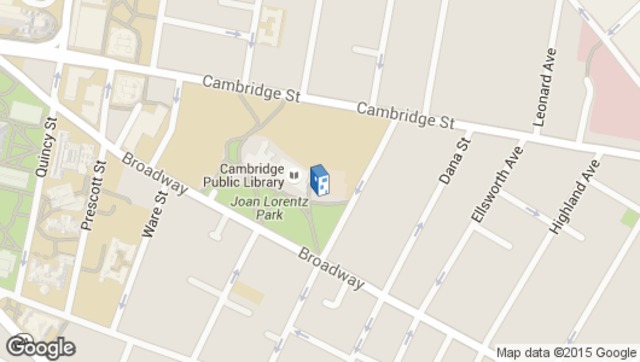 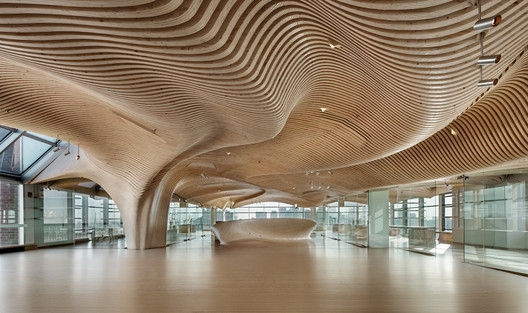