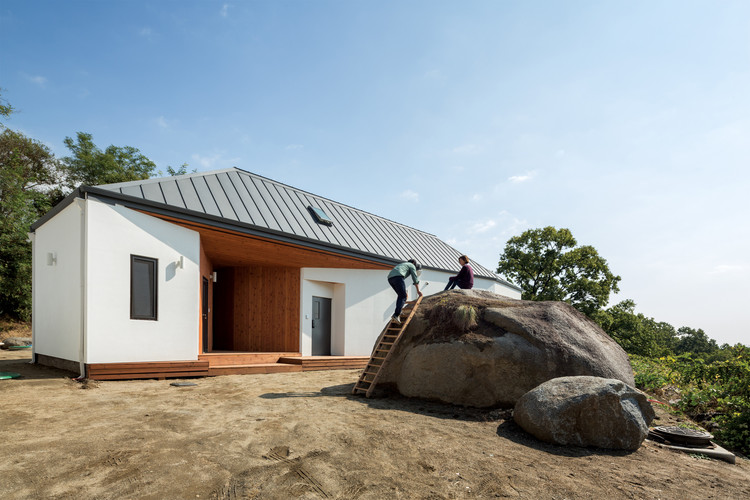 As the demand of rural housing grows, more and more people are developing and moving to spectacular mountainous areas. The site on which the rock house was located is also one of the rural housing sites developed in this way. Particularly, the greatest advantage of developing a mountainous area into a building site is ensuring the open view based on the high level as well as the right to the southern light with no interference. In addition, the rock house has a unique site specific: the naturally stony land, excavation of which thus has revealed a great rock on the site. The unrealistic rock we encountered when visiting the site has been located at the mouth of entering the house, so exquisitely hiding the neighboring house and opening the view toward the Northern Han River. From this time on, we have referred to this house as the rock house.

The client of the rock house is two sisters whose hobbies are travel and woodwork. It is said they agreed to make a house built by hoping that the mind of leaving the busy everyday of the city for coming back home would be pleasurable as if they were traveling. Just like this hope, a home for them is not only a physical shelter but also the playground exclusive to them and the travel destination of a long-awaited dream. We attempted meetings to address such a desire by exploring the site specifics. Particularly, we left intact the great rock existing on the ground but from which we began to design a small journey. Putting the house at the center of the site and creating a circulation inside the house enabled sequence from the rock through the forest at the backyard to the living room where one can see the Northern Han River. In this experience, one comes to encounter three yards with different characters and can enjoy so long and variegated landscapes.

1.The yard embracing the rock (in between the carpentry shop and the main floored room)

2.The yard embracing the Northern Han River (the front yard as a linkage of the living room and the dining room)

3.The yard embracing the forest (the private yard for tending a kitchen garden or barbecuing)[1]

Since general rural housing is built at a natural green site, its maximum building area has only a small portion (legally 20%) of the whole site area. Due to this legal regulation, most rural houses came to have an abnormally greater yard than the building scale while the use and purpose of the yard are unclear. Thus, we reorganized the program of the yard through the relationship between the rock and the house: the living room, dining room, workshop, and front door lead to different yards respectively, so that the whole site can be evenly serviced by functions and uses.